You Can't Handel The Truth


Today is the 326th birthday of the incomparable, the illustrious, the inspired George Frideric Handel! The kicking king of Kappellmeisters! The hot harpsichordist of Halle! Old-school originator of the oratorio! So our purpose here is clear: sit back and marvel at the man, the master, the myth.

If you think you can Handel it. * 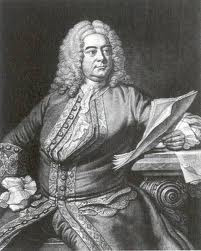 Born in the German town of Halle in 1685, Handel studied briefly at the University of Halle, before moving to Hamburg in 1703, where he served as a violinist in the opera orchestra and subsequently as harpsichordist and composer. From 1706 until 1710 he was in Italy, where he further developed his mastery of Italian musical style. Appointed Kapellmeister to the Elector of Hanover, the future George I of England, he visited London, where he composed the first London Italian opera Rinaldo, in 1710 and settled there two years later. He enjoyed aristocratic and later royal patronage, and was occupied largely with the composition of Italian opera with varying financial success until the 1740s. He was successful in developing a new form, English oratorio, which combined the musical felicities of the Italian operatic style with an increased rôle for the chorus, relative economy of production and the satisfaction of an English and religious text, elements that appealed to English Protestant sensibilities. In London he won the greatest esteem and exercised an influence that tended to overshadow the achievements of his contemporaries and immediate successors. He died in London in 1759 and was buried in Westminster Abbey in the presence of some 3000 mourners.

Handel wrote over forty Italian operas, the majority for staging in London. The operatic conventions of the time, restricting subject and form, and the major use of castrato singers in the principal male rôles, led to a general neglect of this important part of Handel's work until recent years, with the increased cultivation of male soprano and male alto voices and a growing understanding of Handel's achievement within the limitations of the genre. Arias and other operatic excerpts, however, have retained a continued place in vocal and to some extent in instrumental repertoire. In particular the aria from the opera Serse of 1738, Ombra mai fù, popularly known as Handel's Largo, has re-appeared in every possible arrangement. Other arias are familiar in something approaching their original form. These include Lascia ch'io pianga from Rinaldo, Piangèro la sorte mia from Giulio Cesare and Care selve from Atalanta.

Messiah is by far the best known of all English oratorios. Its three parts deal with the birth, passion and resurrection of Christ, using a text in part derived from the Bible and from the version of the Psalms familiar from the Church of England Book of Common Prayer. The work was completed and first performed in 1742 and later repeated annually in London in aid of the Foundling Hospital. Israel in Egypt, Judas Maccabaeus, Samson, based on Milton, and Solomon are only some of the English oratorios of Handel that are familiar in whole or in part to choirs and audiences. To these may be added the secular oratorio Semele, with a text by the dramatist William Congreve, dealing with an episode from classical mythology and including, for a disguised Jupiter, the well known aria Where'er you walk.

Handel wrote music for the Catholic liturgy in 1707, when he was in Rome. In England, under the patronage of the Duke of Chandos, he wrote a set of anthems, the so-called Chandos Anthems. The four Coronation Anthems, written for the coronation of George II in 1727, represent music for a royal ceremonial occasion at its most impressive. Other settings for the Anglican liturgy include the Utrecht Te Deum of 1713, celebrating the Peace of Utrecht, and the Dettingen Te Deum, a celebration of the victory of Dettingen over the French army in 1743.

The story of the shepherd and shepherdess Acis and Galatea and the monster Polyphemus forms the basis of the pastoral Acis and Galatea, first performed in 1718. The aria of Polyphemus O ruddier than the cherry is in popular baritone repertoire. L'allegro, il penseroso ed il moderato, based on Milton and completed in 1740, provides at least one popular soprano aria, Sweet bird. In the earlier part of his career Handel wrote a large number of solo and duo Italian cantatas, with instrumental accompaniment, as well as vocal duets and trios with the more economical accompaniment of basso continuo, a chordal and a bass instrument. This last repertoire deserves further exploration.

Since Corelli, a musician who was said to have found Handel's "French" style alien to Italian tradition, the concerto grosso had continued as the most popular Baroque orchestral form, with a small concertino group, usually of two violins, cello and harpsichord, contrasted with the whole string orchestra. Handel wrote and published in 1739 a set of twelve such concertos, Opus 6, designed originally for strings and continuo. An earlier compilation of six concerti grossi, scored also for wind instruments, had been published in London in 1734. Alexander's Feast is the name given to one of the concertos first performed with the choral work of that name, a setting of Dryden in celebration of the Feast of St. Cecilia, patron saint of music, in 1736. His sixteen Organ Concertos, the first six included in Opus 4 and a further six in Opus 7, served a practical and novel purpose as interval music, to be played at performances of oratorio. No. 13 is generally known as The Cuckoo and the Nightingale. The Water Music is a set of pieces written in 1717 to entertain George I as he was rowed up the Thames to supper at Chelsea, and the Music for the Royal Fireworks, written in 1749, preceded a firework display in Green Park, a celebration of the Peace of Aix-la-chapelle.

Music for smaller groups of performers by Handel includes a number of Trio Sonatas, the majority for two violins and basso continuo, and a number of sonatas for solo instrument and continuo, six for recorder and six for violin. The publisher of the twelve sonatas of Opus 1, about 1730, described a dozen of these sonatas as for treble instrument and continuo, allowing potential performers a freedom of choice that was not altogether unusual at the time.

Handel was as versatile as any musician of his age. He excelled, however, as a keyboard-player, judged in an early contest in Rome with the harpsichordist Domenico Scarlatti, with the wisdom of Solomon, as the better organist, while Scarlatti was honoured as the better harpsichordist. Handel left a great deal of keyboard music, most of it for the harpsichord and much of it written early in his career. The first eight Suites for harpsichord were published by the composer in 1720, followed in 1733 by a second collection of eight Suites, assembled largely by the publisher. The G major Chaconne, using a popular Baroque variation form, consists of 62 variations on a simple repeated bass pattern.

The Air from Suite No. 5, with its five following variations, has won fame under the title The Harmonious Blacksmith, a reference to an unlikely anecdote concerning the inspiration of the piece.

*I apologize for overusing this kitsch. I use it every year and it never gets old for me.

If you aren't on our NML monthly update, you're missing out on great monthly offers (for some Free Stuff!)


February is Black History Month--a time dedicated to honoring Black Americans and their contributions throughout history.

From a musical standpoint, Jazz is one of the greatest gifts that Black American musicians have given the world. In all its forms from big band to solo improv, from traditional to experimental, from formal to funky, Jazz has altered the musical landscape beyond recognition.

In honor of Black History Month Naxos is offering a three-month free trial of Naxos Music Library Jazz for your students. That's an extra two months of free streaming jazz from labels like Fantasy Records, Naxos Jazz, Jazzwerkstatt, and Innova! E-mail us now to start your trial.

NML Jazz offers thousands of recordings from over 50 labels. In addition to enjoying the NMLJazz on your computer, it's got a fully functioning iPhone App! Check the App store to download and enjoy Jazz greats on the go!

In addition the classics on Fantasy, you can find traditional, contemporary, experimental, and more on other labels like these.

Have a Jazzy Weekend!
Nick

Join in the conversation!