Label in the Spotlight: Avie Records 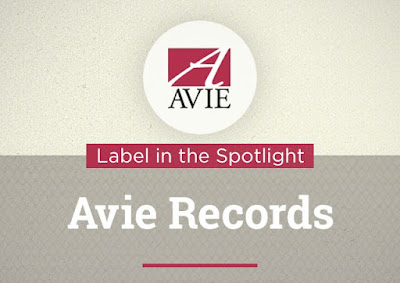 Avie Records is a top-quality classical music label that operates with a particular awareness of the artists’ own interests. It was launched in 2002 by industry veterans Simon Foster and Melanne Mueller. Artists include Rachel Barton Pine, the Royal Liverpool Philharmonic Orchestra, Trevor Pinnock and the European Brandenburg Ensemble, Douglas Boyd and the Manchester Camerata, and Christopher Hogwood.

To hear the Avie Records sampler, access NML, go to the Playlists section, and select the Label in the Spotlight folder under the Themed Playlists tab. You can also access it via the rotating banners. If you are on your institution's premises, you may also be able to access it if you CLICK HERE.

Posted by Naxos Music Library at 10:46 AM No comments:


Each month, Naxos Music Library presents a new release playlist for our subscribers to enjoy. We know that a database of over 1.8 million tracks can be a bit daunting, so we'd like to highlight some of the amazing music that has become available to you just this month. Let it kickstart discovery!
Posted by Naxos Music Library at 12:22 PM No comments: 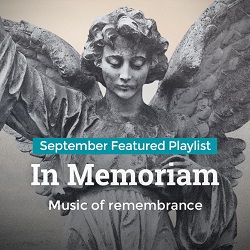 Those of us who are old enough remember exactly where we were fifteen years ago when the news broke that a plane had been flown into the World Trade Center in New York City. We spent that day glued to our televisions, and we knew that our worlds would never be the same. In that moment, we were all united.

Such unity has been harder to come by in the years that followed, but what is most important is that we stay focused on our common humanity. Thankfully, music can often be a great unifier, and a healthy means of expressing and processing our grief. As we look back at the events of September 11, 2001, we offer up these tracks In Memoriam.

1. Charles Ives – Orchestral Set No. 2: III. From Hanover Square North, at the End of a Tragic Day, the Voice of the People Again Arose – The sinking of the Lusitania was a major catalyst for the United States’ involvement in World War I, and "From Hanover Square…" was Ives’ depiction of an incident the day the news broke. As he awaited a train at Hanover Square, the crowd spontaneously sang the hymn "The Sweet By And By", a melody Ives incorporated in the work.

3. Samuel Barber – Agnus Dei – More than thirty years after he composed his most famous work, Adagio for Strings, Samuel Barber set the liturgical Agnus Dei text, part of the Catholic mass, to an arrangement of it for acapella choir. Adagio for Strings is rightfully known as one of the most mournful melodies of all time, and the version for choir adds a communal and spiritual element to it.

4. Stephen Paulus – Prayers and Remembrances: VII. Grant That We May Love – Stephen Paulus passed away in 2014 following more than a year in a stroke-induced coma. This recording of his gorgeous Prayers and Remembrances was supervised by Paulus himself mere weeks before his stroke, and it is a fitting memorial for one of the great composers of his day.

5. Alla Pavlova – Elegy – Alla Pavlova was born in Ukraine, then lived in Moscow and Sofia before moving to New York City following the collapse of the USSR. She spent the early part of her composition career focusing on vocal and chamber works, with this selection, Elegy, becoming her first work for large ensemble.

6. Anna Þorvaldsdóttir - Heyr þú oss himnum á – Anna Þorvaldsdóttir took the text for this choral piece from an ancient Icelandic psalm, one that translates in part to: “Hear us in heaven, loving Father, as we, your small children, ask for the fortune to receive eternal life.” The album from which this is taken, Skylark’s Crossing Over, is a soothing expression of peace in the face of death.

7. Jón Leifs – Erfiljóð (Elegies): I. Söknuður (Grief) – Leifs was estranged from his family when his teenage daughter Líf drowned in 1947, and he composed four different works as a way of seeking forgiveness from her. In Erfiljóð, composed for a male chorus, one can hear both his profound grief and his tender love.

8. Kevin Puts – Symphony No. 2 – Puts describes his Symphony No. 2 with this: “A couple of weeks [after 9/11], writer Jonathan Franzen would write in The New Yorker, ‘In the space of two hours we left behind a happy era of Game Boy economics and trophy houses and entered a world of fear and vengeance.’ My Second Symphony is a musical illustration of this sudden paradigmatic shift.”

9. Eric Ewazen – A Hymn for the Lost and the Living – Ewazen was teaching a class at Juilliard when the events of 9/11 unfolded, and he used his observations of the following days as inspiration for this work, which was commissioned by the U.S. Air Force Heritage of America Band. The music depicts the first few days of stunned grief and sadness, followed by that weekend’s expressions of unity and tribute.

10. Frank Ticheli – An American Elegy – The original inspiration for An American Elegy came from another moment when the world changed, at least for Americans: the Columbine High School shootings in 1999. Ticheli states, “I hope the work can…serve as one reminder of how fragile and precious life is and how intimately connected we all are as human beings.”

11. George Quincy – Voices from Ground Zero: III. Mirrors of Being – Oklahoma-born composer George Quincy derives much of his musical inspiration from his Choctaw heritage, but in this case he expresses the equality and unity of all Americans in his tribute to the events of September 11.

12. Joan Tower – In Memory – Tower began work on her string quartet In Memory as a tribute to a close friend who had passed away. However, the 9/11 attacks happened while she was working on the piece, and it took on a much more intense tone. As she put it, the piece “veers between pain and love and anger”, and one can hear the very raw emotions ultimately subside into gentle grief.

13. Mohammed Fairouz – Symphony No. 4, “In the Shadow of No Towers”: III. One Nation Under Two Flags – Fairouz based his Symphony No. 4 for wind band on a comic book by Art Spiegelman of the same title. It makes a more controversial political statement than many composers dared to make, with the third movement dividing the ensemble into two groups representing a polarized America in the years after 9/11.

14. Ellen Taaffe Zwilich – Clarinet Concerto: II. Elegy: September 11 – Zwilich was about to begin work on the second movement of her Clarinet Concerto when 9/11 occurred. That movement became an elegy to the victims, and the following movements continued from there. By coincidence, the first movement worked as a picture of New York right before the event, creating a seamless story despite the change in intentions.

15. Kevin Malone – Concerto for 2 Double Basses, “Eighteen Minutes”: VI. ---- — Malone took a mathematical approach to his reaction to 9/11, basing the musical phrases around the number eighteen, which represents the eighteen minutes that passed between the collisions with the two towers. The soloists’ parts were derived from the speech cadences of shocked witnesses of the event.

16. Maurice Duruflé – Requiem: Pie Jesu – A notorious perfectionist, Duruflé’s output is very limited, and much of it is for the organ. However, his Requiem is probably his best-known work. It exists in three versions: choir/soloists with cello and organ, choir/soloists and small orchestra, and choir/soloists and full orchestra. It is the first version selected here, as performed by a treble soloist.

17. Robert Moran – Trinity Requiem: In Paradisum – Trinity Church, near the intersection of Wall Street and Broadway in New York City, became a place of refuge during the 9/11 attacks. For the 10th anniversary, they commissioned this Requiem from Robert Moran, which features the church’s youth chorus, along with organ, harp, and cellos.

18. René Clausen – In Pace – Clausen is a composer, conductor, and professor associated with the Concordia Choir in Moorhead, Minnesota. His work In Pace (a Latin text meaning “in peace”) was composed in memory of a cantor at a synagogue in South Florida. This performance is by the Grammy-winning Kansas City and Phoenix Chorales under conductor Charles Bruffy.

19. Steve Reich – WTC 9/11: III. WTC – Commissioned, performed, and recorded by the Kronos Quartet, WTC 9/11 incorporates pre-recorded vocals taken from first responders, as well as interviews Reich conducted with friends and neighbors who were in Manhattan when the attack occurred. The original cover artwork for the album included an image of the World Trade Center during the attack, but this was changed to the current version following complaints.

20. John Adams – On the Transmigration of Souls – Premiered a year after the 9/11 attacks, this work was commissioned by the New York Philharmonic and went on to win a Pulitzer and multiple Grammys. It is meant to convey not just the transmigration of souls from life to death, but also the changes that occur within those who are left behind in the aftermath. Adams prefers to call the work a “memory space”, rather than a requiem or memorial.


Each month, Naxos Music Library presents a themed playlist for our subscribers to enjoy. We know that a database of over 1.8 million tracks can be a bit daunting, so we'd like to highlight some of the amazing music that is available to you. Let it kickstart discovery!
Posted by Naxos Music Library at 12:14 PM No comments: