Where My Girls At? Pt. II

As a woman and as a musician I stand fully behind Women's History Month. First, women fought to be taught music. Once music was considered a worthwhile pursuit for well-off ladies (in the parlour only, of course), they had to fight to perform, fight for the stage in the opera and the concert hall. And you would hope or maybe even expect that women would be much more welcomed as composers in this day and age. While there are many more being performed (especially in the new music/alt-classical/contemporary classical movement), the reality remains that female composers still fight for exposure, performance, and Aretha's most coveted commodity: R-E-S-P-E-C-T. Furthermore, it's amazing how many people, classical music devotees included, can't name a female composer other than perhaps Joan Tower.

So here are a few of my favorite living composers who happen to be women (and their works). Movers, shakers, wave-makers, iconoclasts, creators. Listen up.


(I'm getting a little minimalist on you here--just names and music. I don't want to color your expectations too much. I hope all with rococo tendencies can forgive me.)

Mo
nmlhelp@naxosusa.com
Posted by Mo Coombs at 3:28 PM No comments:

Where My Girls At? Pt. I

Most people know about those big-name musical foremothers like Hildegaard von Bingen, Fanny Mendelssohn-Hensel, and Clara Wieck-Schumann, but what about the others? Here's your freshman Intro to Music History, Lady-Style. 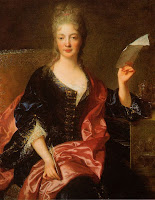 Elisabeth-Claude Jacquet de la Guerre
Like many women in music, Elisabeth Jacquet de la Guerre was hailed as a virtuosic performer before she came to light as a composer. While she composed in most of the forms of the day, her most well known works remain those she wrote for her own instrument--the keyboard.

Barbara Strozzi
Barbara Strozzi was a noted Venetian woman, the adopted daughter of playwright Giulio Strozzi. The surviving body of her work is vocal in nature, both solo and ensemble, ranging from madrigals to arias. The heavily vocal nature and similar pitching corroborates the view that much of her work was written for her own performance in her home.

Alma Mahler-Werfel
Wife of Gustav Mahler. Alma Mahler was another woman composer whose work was largely suppressed by male influence--though not in such a benign way. Gustav Mahler thought it "unseemly" not only for women to compose, but for both members of a couple to compose. It is believed that he actively forbade her to compose, under the auspice of removing any barriers to her wifely duties. She resumed composition after Mahler's death.


Liza Lehmann
The English soprano Liza Lehmann actually composed little before her marriage and the end of her performing career. She had a respectable career as a singer, but when struck by Bell's palsy she lost fine control of her vocal folds. At that time she turned back to composition, for which she had shown an aptitude when young but never pursued seriously. She enjoyed a fair amount of popularity in her lifetime with song cycles such as Daisy Chain, Cherry Ripe, and In a Persian Garden, and often accompanied her own compositions at the piano. 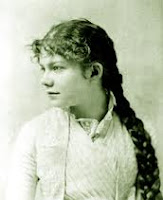 Amy Beach
Amy Beach is particularly notable as the first American woman to experience large-scale success as a composer. As a young girl, Amy Cheney was, like many other females, to begin her career as a well-known performer. Once she married, becoming Mrs. H.H.A. Beach, her husband decided that she would compose rather than perform. She composed 300 works in her lifetime, nearly all of which were commercially published. This widespread success made her a giant among women in music.

Johanna Beyer
Johanna Beyer worked in relative obscurity in her lifetime, largely ignored as a composer even by the experimental music community. She continued to study with teachers like Henry Cowell and Ruth Crawford Seeger, whose influence can be heard in her harmonic and contrapuntal language. The work has been explored further posthumously and Beyer is beginning to gain posthumous respect as an experimental composer.

Found it on the NML: Clarinet Suite No. 2 in Bb major, INNOVA589

Nadia Boulanger
The elder Boulanger sister composed much less prolifically than did the younger. It is believed that Nadia thought Lili to be much more gifted than she herself was, which likely led to her halt in composition. Nadia proceeded to have an extremely active international career as an organist, composer, conductor, and educator. She championed the music of her pupils at every turn, among whom were counted Bernstein, Virgil Thomson, Carter, and Copland.


Lili Boulanger
Lili Boulanger was the possessor of another nascent performing career cut short by illness. She relied solely on private instruction for her musical education, as her frailty precluded a full conservatory education. Remarkably, she became the first woman to ever win the Prix de Rome with her work Faust et Helene in 1913. The broad use of orchestral color in her compositions was considered quite imaginative, as was her later exploration of polytonalality.

Enhanced Search - Find What You're Looking For!

The curtain opens on a college music library. It's a warm environment, and the sound of music fills the background, just audible enough to know that it's there. An Amazing Librarian is working behind the circulation desk, where a student approaches...

I'm putting on my recital and I've come to the College Music Library for some help. I've got a lot of "loud- bangy-things" on the program already, and think something on the Marimba would be great. Can you help me find what I'm looking for? 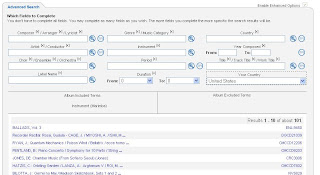 Hello Nick! Let's use the Naxos Music Library to find something! Simply go to the Enhanced Search, and enter "Marimba" in the instrument field. That should get you started.

(Nick)
Wow...Great! However, I've heard of this composer.. Ney Rosauro - who composed a whole bunch of Brazilian music, which would round out the program nicely. Can these results be refined down? 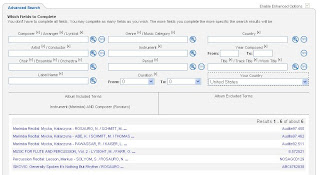 (Amazing Librarian)
Yes they can! By adding the composers name to the Composer box - your search is refined! Look at that, here are 6 discs that contain music by Ney.

(Nick)
Great - but I've only got about 5 minutes left in the recital to add a new piece- would you mind narrowing it down for me? 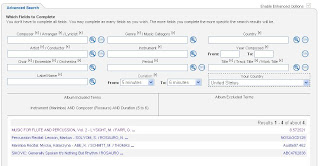 Not a problem! Simply enter the duration in the box, and include it into your results...and...Voila! We've got these 4 discs that contain Ney Rosauro marimba works between 5 and 6 minutes long! Happy Listening!


Include AND Exclude Terms!
Alright - while the above may be a bit "over the top" - it's an incredibly real scenario. With the new Naxos Enhanced Search - coming to the Naxos Music Library, Naxos Jazz Library, and Naxos Spoken Word Library soon - you'll be able to use these resources to aid members!

Not only will you be able to include and filter results in real-time, but you'll be able to "exclude" certain things from your searches as well!

Let's say that I'm looking for a disc to listen to that's got the following:
- A piece composed by Bach
- On the Naxos Label
- It contains the Viola
- It does not contain any Cello

*The NML has 2 discs that meet this criteria!

The new Enhanced Search will allow you to do this, with near instant results that can be constantly filtered "down" or "up" depending on your level of specificity. Here's the evolution of the above search.

First - All discs that contain pieces composed by Bach.

d - Narrow that list down, by including only those Bach compositions on the Naxos label.

Third - Let's get this list more manageable - filter out anything that contains the Cello. This will return all of the discs that contain Bach, on the Naxos Label, with no cello.

Finally - We only want discs that contain the Viola, from that list. We get our 2 discs!

Results Filtered By Country
And the last, but certainly not the least, feature to mention here, is that country restricted recordings will no longer be shown in your search results. For our friends in the United States trying to do a search for Elvis (wanting Costello, but getting Presley) - the wait is over. For our friends in Hong Kong, Korea, Canada, and beyond - we're all getting customized results!

Here's an example of what 2 different subscribers will see - one is a student in the United States. The other, is a musician in Canada.

Canada - (No Restrictions on Recordings) - USA (Many Restricted Recordings)

All in all - we hope you enjoyed this short look at some of the interesting Enhanced Searches we were able to perform. We look forward to the days ahead where we can all search together!

We appreciate any and all feedback on the design plans - so please post below or email us directly with your comments! Who knows...you may be the one to add a feature that millions will use every day!


Join in the conversation!