Label in the Spotlight: Alba Records 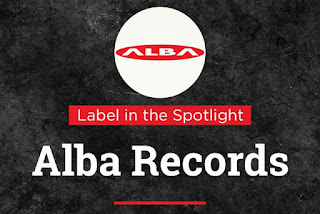 “We have really enjoyed during many years working with the record company Alba. Alba comes from Finland. It’s a very forward-looking, wonderfully fearless record company that does all sort of music: the newest new, the oldest old, and practically everything in between, but always with the best quality. We always get to work with the best producers when we work with Alba Records. So, if you are interested in music, please, be interested in Alba Records and what they do, they are wonderful.”
--Sakari Oramo, conductor

To hear the Alba sampler, access NML as usual, go to the Playlists section, and select the Label in the Spotlight folder under the Themed Playlists tab. If you are on your institution's premises, you may also be able to access it if you CLICK HERE.

Posted by Naxos Music Library at 2:57 PM No comments:

We've sifted through all the new releases for May 2016, and we're highlighting our favorites. Some of these are obscure works that may be unknown to you, while others are fresh takes on standard repertoire. If you're like us and are constantly craving something new to enjoy, take a spin through these tracks to get a taste of what is now available to you in NML. And if you hear something you love, click on the cover art in the player window to be taken directly to the full album!

Randall Thompson
Requiem: Part V: The Leave-taking: Thou Hast Given Him

Each month, Naxos Music Library presents a new release playlist for our subscribers to enjoy. We know that a database of over 1.8 million tracks can be a bit daunting, so we'd like to highlight some of the amazing music that has become available to you just this month. Let it kickstart discovery!
Posted by Naxos Music Library at 11:46 AM No comments: 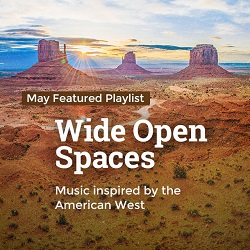 The American West has long been a source of inspiration for artisans of all kinds. The mythos built
up in previous generations by Louis L’Amour, John Wayne, and others has become ingrained in our general consciousness, and tales of historical cowboys and outlaws have gained legendary status.

Romanticized as the plains and canyons and mountains might be, we can’t ignore the dark side of history either. In America’s quest for the West, we have pushed to the margins the proud nations that had inhabited the land for so many centuries before. We can’t change the past, but we can acknowledge it and do what we can to ensure history is not repeated. After all, there is plenty of room for all of us in these Wide Open Spaces.

1. Aaron Copland – Rodeo: Hoe-Down – No composer more fully embodies the spirit of the American West than Aaron Copland does in his greatest works. In this recording, an orchestra from the heart of the West takes on Copland’s best, and their rousing rendition of Rodeo will leave you bouncing in your seat, shouting “Yeehaw!”

2. Morton Gould – Cowboy Rhapsody – American Morton Gould composed for a wide variety of mediums, including film, television, stage, and concert hall, and later in life he championed the intellectual rights of performing artists as president of ASCAP. He was at his best when incorporating unexpected elements into his music, such as those heard in his Cowboy Rhapsody.

3. Virgil Thomson – The Plow That Broke the Plains: The Homesteader – Born in Kansas City, Missouri, Virgil Thomson had the wide open spaces in his blood. He was commissioned to compose the soundtrack to The Plow That Broke the Plains, a 1936 documentary about the circumstances that led to the Dust Bowl that was decimating crops across the middle of the country at the time.

4. Ferde Grofé – Grand Canyon Suite: III. On the Trail – Grofé’s biggest claim to fame is that he arranged Gershwin’s Rhapsody in Blue, originally composed for two pianos, for orchestra, and it’s his version most often heard today. He was a solid composer in his own right, however, and his Grand Canyon Suite is his original work that is most often performed.

5. Antonin Dvořák – Symphony No. 9, “From the New World”: II. Largo – It’s a testament to non-Native Americans’ immigrant heritage that the best-known orchestral piece associated with America was actually created by a Czech composer. Dvořák composed it while living in the U.S. as a conservatory director, and he was intentionally attempting to forge a uniquely American sound.

6. Libby Larsen – 3 Cowboy Songs: No. 2. Lift Me into Heaven Slowly – Libby Larsen grew up in Minnesota, and she went on to become the first female composer appointed to a residency with a major orchestra (the Minnesota Orchestra) in 1983. Yes, it really took that long to reach that milestone. Her style is distinctly American, and her favorite composers are as diverse as J.S. Bach, Harry Partch, and James Brown.

7. George Quincy – Choctaw Nights: II. Trio for a Comet - Oklahoma-born composer George Quincy derives much of his musical inspiration from his Choctaw heritage, and this piece for flute, bassoon, violin, viola, and piano is no exception. You can easily imagine yourself lying back in the grass somewhere in Oklahoma, staring up at shooting stars in the massive sky above.

8. Jerod Impichchaachaaha’ Tate – Tracing Mississippi: IV. Hashi’ Hiloha (Sun Thunder) – Jerod Impichchaachaaha’ Tate, a composer from the Chickasaw Nation, composed Tracing Mississippi as a remembrance of his people’s original homeland, from which they were deported to Oklahoma during the Trail of Tears. It incorporates melodies of three different tribes affected by that tragedy, the Chickasaw, Choctaw, and Comanche.

9. Nico Muhly – Control: No. 5. Red Dust – Commissioned by the Utah Symphony, Control describes five different elements of Utah’s natural environment and human interaction with it. The fifth part is a musical picture of southern Utah and the red dust that permeates everything there and finds its way into hair, shoes, and clothes, and even follows visitors to their next destination.

10. Joan Tower – Big Sky – Composer Joan Tower describes her piano trio Big Sky as “an image of a big landscape, a Montana-like sky and maybe a lone wild stallion roaming freely within that. Sometimes he is staring at the peaceful gigantic blue sky, other times running wildly and freely over the green mountains.”

11. Olivier Messiaen – Des canyons aux étoiles…: X. La grive des bois – Translated as From the canyons to the stars…, this work by the French composer Messiaen was commissioned to celebrate the bicentenary of the U.S. Declaration of Independence. Messiaen found his inspiration on a visit to Utah’s Bryce Canyon National Park, a place filled with colorful canyons that triggered his sound-color synesthesia.

12. Arthur Farwell – Navajo War Dance No. 2 – From about 1880-1920, there was a niche movement in American classical music known as the “Indianist” movement. These composers attempted to synthesize elements of Native American music with traditional classical forms. One of the leading representatives of this style was Arthur Farwell, who founded the Wa-Wan Press, a music publishing company that specialized in that style.

13. Elie Siegmeister – Western Suite: IV. Buckaroo – Siegmeister was an active supporter of the movement to establish an authentic American style in classical music. He wrote a number of books on the subject, notably Treasury of American Song, The Music Lover’s Handbook, and a widely used textbook called Harmony and Melody. His Western Suite was premiered under the baton of Arturo Toscanini in 1945.

14. Roy Harris – Symphony No. 4, “Folksong Symphony” – III. Interlude: Dance Tunes for Strings and Percussion – Roy Harris was born in a log cabin to poor farmers in Oklahoma, a heritage in which he took great pride. Eventually he made contacts in the East and gained the support of Aaron Copland, Nadia Boulanger, Serge Koussevitsky, Arthur Bliss, and Arthur Farwell. Most of his works are inspired by distinctly American subjects.

15. Steve Heitzeg – Death of the Dream: Farmhouse Memories – Minnesota native Steve Heitzeg incorporates environmental elements frequently in his music, including stones, sea glass, and birch bark chimes. The son of dairy farmers, his rural upbringing has had a profound impact on his music, making him the ideal composer for the soundtrack to a public television documentary called Death of the Dream (Farmhouses in the Heartland).

17. Dimitri Tiomkin – Red River: Birth of Red River D – An immigrant from Russia, Dimitri Tiomkin was one of the premier film composers in the first half of the twentieth century, receiving twenty-two Oscar nominations and winning four of them. He was known best for his scores composed for westerns, including High Noon, starring Gary Cooper, and Red River, starring John Wayne.

18. Richard Rodgers – Oklahoma!: Act II: Oklahoma!; Finale: Oh, What a Beautiful Mornin’ (reprise) – Oklahoma! was the first musical written by famed duo Rodgers and Hammerstein, and it was based on the play Green Grow the Lilacs. A huge success, it ran for an unprecedented 2,212 performances and earned its composers a Pulitzer Prize. In 1955 it was adapted for film, starring Gordon MacRae and Shirley Jones and winning three Oscars for the music and sound.

19. Elmer Bernstein – The Magnificent Seven: Theme – In 1960, director John Sturges remade Akira Kurosawa’s classic film Seven Samurai and set it in the Wild West. It featured stars Yul Brynner and Steve McQueen, and it was scored by Elmer Bernstein. Bernstein’s other film score credits include The Great Escape, Ghostbusters, Airplane!, and To Kill A Mockingbird.

20. Dale Evans – Happy Trails – Dale Evans and her husband Roy Rogers team up on this recording of her timeless tune “Happy Trails”, which was used as a theme song for a radio program and television show the two shared. One interesting fact about this song is that it was recorded by Janis Joplin as a birthday greeting to John Lennon, a gift that didn’t reach him until after she died three days later.


Each month, Naxos Music Library presents a themed playlist for our subscribers to enjoy. We know that a database of over 1.8 million tracks can be a bit daunting, so we'd like to highlight some of the amazing music that is available to you. Let it kickstart discovery!
Posted by Naxos Music Library at 10:20 AM No comments: