Music Challenge Day 3 - Only the Living

Day 3 of my spontaneous music challenge was focused on living composers. If you're familiar with my blogging or my social media-ing at all, you know that I'm a big proponent of living composers. Here are a couple of my picks from that day of listening. 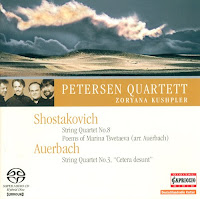 I started out my day with Lera Auerbach's Cetera desunt, "Sonnet for String Quartet No. 3." I really enjoy Auerbach's work in general, but the feminist part of me especially likes it because she's a quite successful young female composer. Not yet forty, she's been cranking out lovely work that teeters between tonality and atonality for years. Her work gets paired with Shostakovich often on records, and not without reason. There's some of that same forcefulness in her writing, some of that bow-breaking intensity, some of the endlessly building tension.
C71104 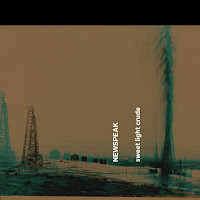 The new music movement (or alt-classical or indie chamber, or whatever you want to call it) is a thing I really like, despite many of the pretensions assumed to surround it. In the end a lot of it is just good music. Newspeak is one of those prestigious New York new music ensembles that perform the compositions of all those hot young New York composers. They're under the direction of David T. Little, a percussionist and composer of my favorite work on this disc--the title track, sweet light crude. This piece wends its way through light and simple loveliness into angular modern beauty, then groove territory and frenetic chamber rock and minimalist breakdown in what I would call the B section, and back to a lovely, sad denouement. The composer notes that this is "about love and addiction; about misery; about the perversity of loving your captor. It’s a love song to oil."
All the works here are worth a listen, but the title track really stood out to me as exceptionally composed and performed.
NWAM026

To be entirely frank, I think a lot of the doom and gloom surrounding the classical music scene would dissipate if people would recognize living composers as what they are--the Bachs and Beethovens and Brahmses of today. Sure, it doesn't look exactly the same. But would you really want it to?

This challenge was intended to get listeners going on different things. In point of fact, the mandate was to "not listen to a single work you've heard before."

Now, I listen to music as part of my job. I do it when I'm doing still other parts of my job. And I'm passionate about music discovery. So I listen to a lot of new music.
But I normally sprinkle in favored composers and works, mix eras, genres, and styles, fold in some outside listening (a little punk, a little hip-hop, a little folk). With this project I vowed to listen only to works I had never heard for the entire day, and (since I also listen to lots of living composers) I tried to focus on historic or non-living composers that I had somehow missed. 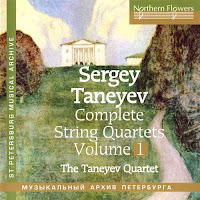 I started out with some Taneyev String Quartets on new label Northern Flowers. What lovely work! I couldn't believe how much I had missed out on with Taneyev, especially the very sensitive viola and cello writing. Some people just totally ignore the lower voices in string quartets, making them fill out chords mechanically. Not the case here.
NF9933 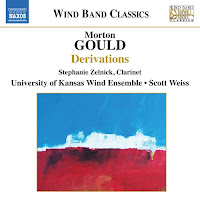 Then I moved on to Morton Gould's Saint Lawrence Suite. Woefully, I'm a singer and former pretend-string player who always wanted to be a percussionist, so I listen to very little wind band music. But this work may have started a sea change in me. All the rich, bright timbre of the University of Kansas Wind Ensemble was put to good work here. There are some sweet bluesy, jazzy elements to the suite that play nicely with the quick, light, Copland-esque moments that occur from time to time. This is also the only original work for wind band ever nominated for a Grammy for composition.
8.572629 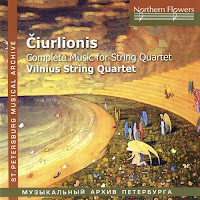 I also discovered M.K. Čiurlionis for myself in this project. Among my other listening, this last stood out. Perhaps it was the opening, in dark Eastern European style writing that called to mind Borodin's quartets, or perhaps that the composer seemed mutable, even a tad volatile. This Lithuanian composer was also a painter, something I felt I could hear in the compositions before I saw the work. I listened to the String Quartet in C minor and the Theme and Variations, both of which could have tended toward the measly or graceless without the correct force of playing. I have to say, the Vilnius String Quartet brought it on that point.
NF9987


What did you listen to?

Music Challenge Day 1- Listen to a Composer You Hate

This week I challenged our social media buddies and myself to get outside of their usual comfortable realm of listening. Four days of boundary pushing (some light lifting, some not so light). Here are my thoughts from each day.


DAY 1: Listen to a Composer You Hate

I hate Mozart.
It's not personal. It's musical. 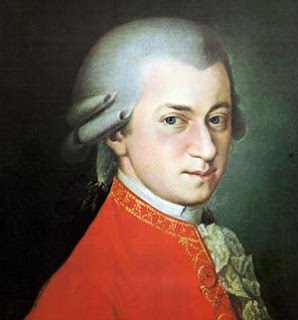 And here we go.
Anyone: But he was a child genius!
Me: I know.
A: But he revolutionized the world of music in both performance and composition!
M: I know.
A: But he WAS the classical era!
M: I know.
A: But you like opera. He wrote some great operas. Lots of them!
M: "Great" is a relative term. If you mean too long to be justified by the content, then...yes.
A: Not even Nozze?
M: Nope. I can stand it, but just barely.
A: Cosi?
M: Ugh.
A: What about the choral music?
M: Meh. Some of it is okay.
A: Everyone likes the Requiem!
M: It's all right, I guess.
A: And Amadeus! Did you see Amadeus?!
M: Yep.
A: Didn't you like it?
M: Nope.
A: ...was it the powdered wigs?
M: Yeah, that's it. That's exactly it. That's the reason behind my ire for the entire output of an absurdly prolific composer.

So that's how it usually goes. I'm not known for writing composers off in such a manner. I'm not trying to be snarky. In point of fact, I always say that I'll listen to just about anything to make my ears smarter. And I will, even with Mozart. ONCE.
It doesn't change the fact that I basically dislike his music. True, it's genius composition. True, it's unparalleled in it's classical-ness. True, I could never compose anything an nth as impressive or lasting. I'm just not a fan.

So today I listened to Mozart. All day, marathon listening. Piano trios, symphonies, operas, string quartets, choral works, everything. I put aside my historical disdain and opened up my ears. It was at once harrowing and humbling.

The only thing I can really say for the experience is "I tried again." At least I didn't just write off the composer because of my leftover feelings about his work. I checked my old opinions against new experience, so it's not just an untested, ridiculous prejudice. But I recognize the gifts that he had and the beauty he gave to the world. It's just not my cup of tea.

Pro musica (all of it!),
Mo
nmlhelp@naxosusa.com
Posted by Mo Coombs at 1:32 PM No comments: