And the Nominees Are...

The 2016 Grammy nominees have been announced, and naturally Naxos Music Library has just about all of them available for you to hear. We've included below links that will work in most cases if you are on your institution's property. If you are not, simply access NML as you normally would, then enter the provided catalog ID into the keyword search field to pull the specific album up.

In addition, we've put together a playlist highlighting a track off of each of the nominated albums. Think of it as a sampler to whet your appetite for exploring further these excellent releases. If you are on your institution's property, CLICK HERE to hear it. If you are not, you can find it in NML by clicking Playlists > Naxos Music Playlists > Grammy Nominees > 2016 Grammy Highlights.

Posted by Naxos Music Library at 4:00 PM No comments: 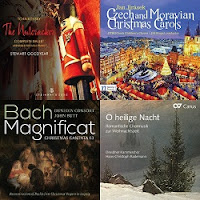 We've sifted through all the new releases for Christmas 2015, and we're highlighting our favorites. Some of these are obscure carols that may be new to you, while others are fresh takes on standard favorites. If you're like us and are constantly craving something to discover, take a spin through these tracks to get a taste of what is now available to you in NML. And if you hear something you love, click on the cover art in the player window to be taken directly to the full album!

Girolamo Abos
Messa a due cori: Gloria in excelsis

P. I. Tchaikovsky (arr. Stewart Goodyear)
The Nutcracker: Waltz of the Flowers

John Gardner
Tomorrow shall be my dancing day


Each month, Naxos Music Library presents a new release playlist for our subscribers to enjoy. We know that a database of over 1.7 million tracks can be a bit daunting, so we'd like to highlight some of the amazing music that has become available to you just this month. Let it kickstart discovery!
Posted by Naxos Music Library at 10:47 AM No comments: 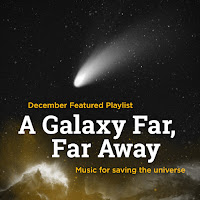 With the imminent release of the latest film in the Star Wars franchise consuming much of the entertainment world, we thought it only suitable to offer a soundtrack to this excitement. The unfathomable universe around us has often been a source of inspiration to composers and storytellers alike, whether it be the impact of a meteorite on our own environment or the imagined dramas taking place in some far-flung corner of the heavens.

It’s human nature to want to understand our universe and to marvel at both the smallness of our world and the incredible significance of existence at all. We have selected here twenty pieces (plus one bonus track!) that demonstrate how different composers have found inspiration in the skies, whether from our own little corner of creation or from A Galaxy Far, Far Away.

1. John Williams – Star Wars, Episode IV “A New Hope”: Main Title. Rebel Blockade Runner – Whether this famous melody owes its inspiration to bits from Nielsen, Dvořák, Holst, or Korngold is a matter of debate, but what is undeniable is that one would be hard-pressed to identify any movie title tune more familiar and thrilling than what John Williams selected for the Star Wars franchise.

2. Nigel Hess – To the Stars! – British composer Nigel Hess is best known as a composer for television and film, but To the Stars! was composed as a collaboration with several primary schools in Bedfordshire County. It finds a balance between musical integrity and playful fun in describing a fantastic voyage into space to meet aliens and battle a black hole!

3. James Guymon – Le Voyage dans la Lune: Voyage to the Moon – Credited as the first science fiction movie, Georges Méliès’ 1902 silent film Le Voyage dans la Lune never had an official musical soundtrack, so many composers have created their own. The track selected here comes from a project in which four different composers a century later were asked to provide their own soundtracks to the film.

4. Ron Goodwin – The Venus Waltz – Ron Goodwin made his career scoring for film and television. He is perhaps best remembered for his soundtracks to war films, but in 1958—just as he was first breaking into film scoring—he and his orchestra released an album titled Out of This World, which included jaunty tunes with titles like “Sally the Satellite”, “Martians on Parade”, and “Playtime on Pluto”.

5. Shirl Jae Atwell – Pulsar – Shirl Jae Atwell is an American composer who has spent much of her career in Kentucky. She has composed several operas, including Lucy, based on a 3.2 million-year-old skeleton, as well as a large quantity of music for string orchestra.

6. Richard Strauss – Also Sprach Zarathustra: Das Tanzlied – Also Sprach Zarathustra is a tone poem that was inspired by a novel by Nietzsche, so it didn’t initially have a connection to outer space. However, its introduction’s inclusion in Kubrick’s 2001: A Space Odyssey forever linked it in the popular consciousness to worlds outside our own. Included here is a passage found later in the work, a taste of what the dramatic opening originally heralded.

7. Nikolay Rimsky-Korsakov – Christmas Eve: II. Mazurka of the Stars - A witch, the devil, a bunch of people tied up in sacks, all under a moonless December sky… Such is the subject matter of the story upon which Rimsky-Korsakov based his opera Christmas Eve. Festive, right? Luckily, the score is full of Rimsky-Korsakov’s characteristically colorful orchestration, and this mazurka is a highlight of the suite derived from the opera.

8. Stellan Sagvik – Solar Plexus: VI. Asteroids – Swedish composer Stellan Sagvik created vivid pictures of the planets and other celestial bodies with Solar Plexus, a work for solo flute. Selected here is an especially descriptive passage, as short bursts from the flute dance about and vanish like asteroids in the night sky.

9. George Crumb – Celestial Mechanics, “Makrokosmos IV”: I. Alpha Centauri – Crumb’s Makrokosmos cycle for amplified piano is probably his best-known work, and it was composed as an allusion to Mikrokosmos by Bartók, one of his favorite composers. This selection takes its name from the closest star system to Earth.

10. Urmas Sisask – Starry Sky Cycle No. 1, “Northern Sky”: No. 19 Pleiades: Alcyone – Estonian composer Urmas Sisask has drawn much of his inspiration from astronomy, even devising his own “planetal scale” based on the movements of the planets. After creating this scale, which is comprised of C#, D, F#, G#, and A, he was shocked to learn that it was identical to the Japanese pentatonic scale.

11. Alexander Courage – Star Trek: Original Theme – It might be hard to imagine now, but Star Trek wasn’t much of a success when it first aired, instead gaining cult status on subsequent reruns. Stars George Takei, William Shatner, and Leonard Nimoy became household names, in recent years maintaining that status as much for their social activism (Takei) and television commercials (Shatner) as for their Star Trek participation.

13. Bruce Miller – Pluto: The Last Planet – Bruce Miller has primarily built his career as a composer for television, having written music for shows like Frasier, ‘Til Death, Designing Women, and Wings. However, this piece for brass band and organ is his ode to Pluto, which in our books is still very much worthy of being called a planet.

14. Augusta Read Thomas – Dancing Galaxy – This work began as a piece for orchestra titled Galaxy Dances, but Thomas later arranged it for wind ensemble and switched the name around. Dancing Galaxy begins and ends quietly in the lower instruments, making it a work that can be looped endlessly to ebb and flow forever just like the universe itself.

15. George Quincy – Choctaw Nights: V. Jupiter – Oklahoma-born composer George Quincy derives much of his musical inspiration from his Choctaw heritage, and this piece for flute, bassoon, violin, viola, and piano is no exception. The final movement begins and ends with a depiction of Jupiter’s otherworldliness, while the central portion settles into the comfort and sense of belonging that comes from gazing up at the night skies of his homeland.

16. Isaac Schankler – Alien Warp Etude – Isaac Schankler is an American composer who draws musical inspiration from indeterminacy and puzzles. This piece for microtonal piano is more listenable than you might imagine, sounding not unlike what one might expect to hear blasted from an ice cream truck on Mars.

17. Ro Hancock-Child – Quasar – Composer, pianist, author, and artist Ro Hancock-Child included this improvisation-based piece on her 2010 album The Speed of Light. It’s the composer’s representation of a quasar, which is a compact region in the center of a galaxy that surrounds a supermassive black hole.

19. Gustav Holst – The Planets: VII. Neptune, the Mystic – Holst closed out his magnum opus with this depiction of the most distant planet known in his day. The atmosphere of ephemeral mystique is created in part by the use of a wordless choir singing from backstage, the door to their chamber closing gradually to cause the sound to drift away to nothingness.

20. John Williams – Star Wars, Episode VI “Return of the Jedi”: End Title – Do you have your ticket yet for Episode VII? Are you planning to dress up as your favorite character? Have you mastered the art of the toy light sabre? Enjoy one last bit of Star Wars music to help boost your excitement to a higher level than ever. Here’s to no more Jar Jar Binks!

21. Ron Grainer – Doctor Who: Theme – We Whovians couldn’t put together a space-themed playlist without a nod to the Doctor. While this saucy version lacks a theremin playing the iconic melody, thus ensuring its exclusion from the playlist proper, we couldn’t leave it out entirely. Think of it as our way of getting to the end of the playlist, then declaring “I don’t want to go!”

Each month, Naxos Music Library presents a themed playlist for our subscribers to enjoy. We know that a database of over 1.7 million tracks can be a bit daunting, so we'd like to highlight some of the amazing music that is available to you. Let it kickstart discovery!
Posted by Naxos Music Library at 10:12 AM No comments: