Label in the Spotlight: Alpha Classics 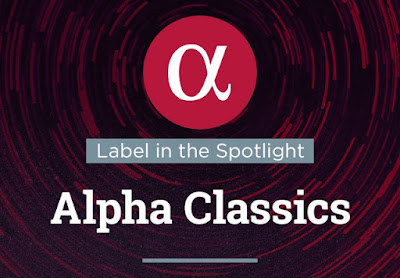 From the Renaissance to the music of the twenty-first century, with new or established talents, Alpha Classics is committed to ambitious projects of the highest artistic standard that often stray far from the beaten track


Based in Paris, it is the principal label of the Franco-Belgian group Outhere Music. Building on its history of more than fifteen years and its reputation founded on early music, Alpha acquired new momentum in 2015 by opening its catalogue to all repertories and welcoming important new artists from exceptionally diverse horizons, the discovery and accompaniment of whom are a key priority for the label.

In order to create a stronger and more prominent label on the international scene, Alpha now brings together all the artists who previously recorded under its name along with those who recorded for Zig-Zag Territoires. This merger will make for greater coherence among the 600 recordings in the existing catalogues (especially in the field of early music, the strong point of both labels) and the new releases.

More than ever, Alpha aims to establish long-term relationships with artists, to release projects that have come to artistic maturity, and to give the fullest attention to recording, editorial content, manufacturing, and communication.


To hear the Alpha sampler, access NML, go to the Playlists section, and select the Label in the Spotlight folder under the Themed Playlists tab. You can also access it via the rotating banners. If you are on your institution's premises, you may also be able to access it if you CLICK HERE.

Posted by Naxos Music Library at 12:49 PM No comments: 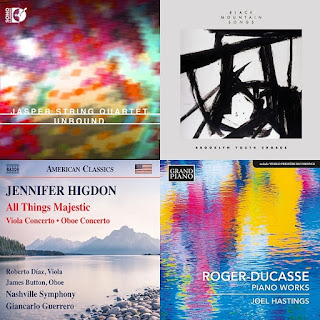 Each month, Naxos Music Library presents a new release playlist for our subscribers to enjoy. We know that a database of over 1.9 million tracks can be a bit daunting, so we'd like to highlight some of the amazing music that has become available to you just this month. Let it kickstart discovery!
Posted by Naxos Music Library at 10:50 AM No comments:

April 2017 - Featured Playlist: In the Musicals 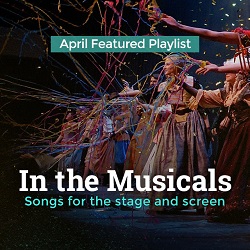 But you know what? Life is too short and precious to hide behind a costly wall of fear; all fear does is separate you from your neighbor, and ultimately it doesn’t keep out what you’re hiding from, anyway. Turn these songs up in the car and sing along with the windows down. Have a good cry over the parts of your heart that might still be a little broken. And take some time to escape your real-life troubles and lose yourself In The Musicals.

2. Mel Brooks – The Producers: Keep It Gay – Mel Brooks is known primarily for his comedy films, among which are Blazing Saddles, Spaceballs, and Robin Hood: Men in Tights. The first film he directed was The Producers, which thirty years later he turned into a musical at the instigation of entertainment mogul David Geffen. It would go on to win twelve Tonys and run for over 2,500 performances.

3. Richard O’Brien – The Rocky Horror Show: Time Warp – One of the cult-est of cult classics, The Rocky Horror Show has remained in nearly constant production since its premiere in 1973, and its film adaptation, The Rocky Horror Picture Show, was released two years later. The film version currently holds the record as the longest-running theatrical release in film history, with its fans showing up in costume and interacting with the film.

5. Richard Rodgers – Carousel: You’ll Never Walk Alone – The team of composer Richard Rodgers and lyricist Oscar Hammerstein II was one of the most successful musical theater pairings of all time, with their massive hits for stage and screen including Oklahoma!, Carousel, South Pacific, The King and I, and—last, but definitely not least—The Sound of Music. It’s rather impossible to settle on only one of their songs, but the recording we selected features brilliant soprano Joyce DiDonato.

6. Claude-Michel Schoenberg – Les Misérables: Bring Him Home – The London production of Les Misérables has run continuously since it premiered in 1985, and it was made into a successful film in 2012 that featured performances so good (Anne Hathaway, Hugh Jackman, Samantha Barks, Eddie Redmayne) they made you almost forget the glaringly bad one (Russell Crowe).

7. Leonard Bernstein – West Side Story: Somewhere – Leonard Bernstein’s 1957 Broadway hit is essentially Romeo and Juliet set in New York City in the 1950s. It was choreographed by the legendary Jerome Robbins, and the lyrics were written by Stephen Sondheim, marking the first Broadway work of his career. The 1961 film adaptation was also successful, winning ten of the eleven Oscars for which it was nominated.

8. Brenda Russell / Allee Willis / Stephen Bray – The Color Purple: I’m Here – The original Broadway run of The Color Purple began in 2005 and earned eleven Tony Award nominations. It would be revived in 2015. Based on the 1982 novel of the same name by Alice Walker, it tells the story of an African-American woman named Celie who lives in the American South in the early to mid-twentieth century.

9. Cyndi Lauper – Kinky Boots: Not My Father’s Son – Cyndi Lauper’s first effort as a musical theater composer has picked up a boatload of award nominations, and she became the first woman to win alone the Tony for Best Score. Inspired by true events, Kinky Boots tells the story of a shoe factory owner and a drag queen who work together to create a successful line of glamorous yet sturdy high-heeled boots.

10. Irving Berlin – The Jazz Singer: Blue Skies – Irving Berlin claims a reputation as one of the great songwriters of the first half of the twentieth century. Besides writing a number of patriotic anthems to boost morale during World War II, including “God Bless America”, he enjoyed a successful career on Broadway and in Hollywood. Many of his songs are recognized as part of the Great American Songbook.

11. George Gershwin – I Got Rhythm Variations – George Gershwin was probably the composer who was most successful at blending jazz with classical music, with pieces like Rhapsody in Blue, An American in Paris, and the opera Porgy and Bess becoming iconic American works of the early twentieth century. His I Got Rhythm Variations is an orchestral work taken from a hit song he wrote for his musical Girl Crazy.

12. Jerry Bock – Fiddler on the Roof: If I Were a Rich Man – The team of Jerry Bock and Sheldon Harnick had won a Pulitzer for their 1959 musical Fiorello!, but it was Fiddler on the Roof, produced five years later, that was their big hit. It became the first musical to exceed three thousand performances on Broadway, and it produced such hits as “If I Were a Rich Man”, “Matchmaker, Matchmaker”, and “Sunrise, Sunset”.

13. Frederick Loewe – My Fair Lady: I Could Have Danced All Night – There is no one quite like Julie Andrews, and one of her big theater roles was as Eliza Doolittle in the original production of My Fair Lady. For the film version, she was replaced by Audrey Hepburn (and dubbed vocals) because at that point she’d had no film experience. However, she had the last laugh, making her film debut in Mary Poppins that same year and winning the Oscar and Golden Globe for Best Actress.

14. Jerome Kern – Show Boat: Ol’ Man River – Jerome Kern was an important figure in the development of musical theater, with a number of his songs becoming standards, including “All the Things You Are”, “The Way You Look Tonight”, and “Smoke Gets in Your Eyes”. While his shows were hugely successful in his day, Show Boat is the only one that currently gets revived often, and it produced the classic tune “Ol’ Man River”.

15. Harold Arlen – The Wizard of Oz: Over the Rainbow – “Over the Rainbow” is considered one of the greatest songs of the twentieth century. Naturally it has been recorded countless times, but it is Judy Garland’s original performance for The Wizard of Oz that remains the standard to which every other version is compared. It is so universally known that if you’ve ever taken an ear training class, your teacher has probably cited its first two notes as an example of an octave interval.

17. Cole Porter – Anything Goes: You’re the Top – We’ve got a Patti LuPone doubleheader for you. Cole Porter’s hit musical Anything Goes has enjoyed numerous revivals since its debut in 1934, including this successful Broadway version from 1987. This song takes place early in the story, and it involves two main characters attempting to out-compliment each other.

18. Jeanine Tesori – Thoroughly Modern Millie: Gimme Gimme – There unfortunately haven’t been a great many female composers on Broadway, but Jeanine Tesori is the queen, claiming status as the most prolific and honored female composer for the theater. Her successful musical Thoroughly Modern Millie was based on a 1967 film of the same name, which in turn was based on a British musical called Chrysanthemum. It is set in New York City in the Roaring Twenties.

19. Jason Robert Brown – Parade: You Don’t Know This Man – A musical called Parade might sound like something you’d expect to be upbeat, with a happy ending, but you would be wrong. It tackles issues of racism, vigilante justice, and corruption in telling the story of a man convicted of murdering a teenage girl. This song, performed here by Audra McDonald, is sung about the protagonist by his wife.

20. Andrew Lloyd Webber – Evita: Don’t Cry for Me Argentina – Andrew Lloyd Webber’s Evita tells the story of Argentinian leader Eva Perón. The most famous song from this work, “Don’t Cry for Me Argentina”, is sung as an encouragement to the people of her country. The role of Eva in the show has been performed by such divas as Elaine Paige and Patti LuPone, and the 1996 film version starred Madonna. Here it is performed by Katherine Jenkins.


Each month, Naxos Music Library presents a themed playlist for our subscribers to enjoy. We know that a database of over 1.9 million tracks can be a bit daunting, so we'd like to highlight some of the amazing music that is available to you. Let it kickstart discovery!
Posted by Naxos Music Library at 10:14 AM No comments: