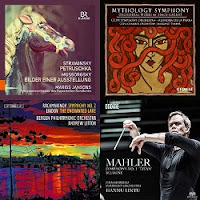 We've sifted through all the new releases for November 2015, and we're highlighting our favorites. Some of these are debut recordings of brand new works, while others are fresh takes on standard repertoire. If you're like us and are constantly craving something to discover, take a spin through these tracks to get a taste of what is now available to you in NML. And if you hear something you love, click on the cover art in the player window to be taken directly to the full album!


Each month, Naxos Music Library presents a new release playlist for our subscribers to enjoy. We know that a database of over 1.7 million tracks can be a bit daunting, so we'd like to highlight some of the amazing music that has become available to you just this month. Let it kickstart discovery!


Posted by Naxos Music Library at 12:04 PM No comments:

November 2015 - Featured Playlist: How the East Was One


One of the most exciting repercussions of a rapidly shrinking world is that disparate cultures can more easily find common ground in creating new art. For centuries music in the East developed separately from the West, establishing its own system of harmony and melody, but as each side of the planet discovered the other, this became reflected in musical development.

A great number of talented composers from China, Japan, and Korea have come to prominence, either by blending their own cultural sounds with Western classical music, or by blazing entirely new trails informed by their multicultural paradigm. This playlist is a wonderful way to experience a truly global sound, an exploration into How the East Was One with the West for these gifted composers.

1. Various composers – The Yellow River Piano Concerto: IV. Defend the Yellow River – Based off of Xian Xinghai’s Yellow River Cantata, this concerto was a prominent example of music under Mao Zedong’s Cultural Revolution of the 1960s and 70s. The work has no fewer than six different composers attached to it, which itself is a representation of the Communist ideology of its time. Along with the Butterfly Lovers’ Violin Concerto, it is one of the best-known Chinese classical works.

2. Zhou Long / Chen Yi – Symphony, “Humen 1839”: IV. Allegro trascinante – Prominent composers Zhou Long and Chen Yi teamed up to create this symphony honoring the Chinese people who fought Britain’s illegal opium trade. The town of Humen was, in 1839, the setting of a Tea Party-esque incident where 1,000 tons of British opium was seized and burned, an event that sparked the First Opium War.

3. Nie Er – Dance of the Golden Snake – Nie Er is best known as the composer of China’s national anthem, though in his two-year career he composed quite a bit of music that was popular with the Communist Revolution. Despite his short life (he drowned at 25), he holds a respected place in Chinese cultural history for his songs protesting Japanese aggression in the years leading up to World War Two.

5. Bright Sheng – 7 Tunes Heard in China: No. 7 Tibetan Dance – Bright Sheng was born in China but has lived in the United States since 1982. As the title implies, this cello suite, premiered by none other than Yo-Yo Ma, makes use of traditional melodies from across China. Included here is the seventh tune, which employs a popular folk melody from Tibet.

6. Tōru Takemitsu – 3 Film Scores: III. Face of Another: Waltz – Japanese composer Tōru Takemitsu took his inspiration from sources as diverse as traditional Japanese music and John Cage. His career began under more avant-garde ideals, but later it progressed to what he called a “sea of tonality” in which a predetermined series of notes would form the tonal base for a work. Over the years he also scored more than ninety films.

7. Kosaku Yamada – Symphony in F Major, “Triumph and Peace”: III. Poco vivace – Yamada was a German-trained Japanese composer during the 20th century. He composed over 1400 works, over half of which were lieder. As a conductor, he was instrumental in introducing many classics of Western music to Japan, including Gershwin’s An American in Paris, Wagner’s Siegfried Idyll, Sibelius’ Finlandia, and Dvořák’s Symphony No. 9.

8. Yasushi Akutagawa – Trinita Sinfonica: III. Finale: Allegro assai – Akutagawa began his career shortly after World War II, and it included a time spent illegally in the Soviet Union, where he befriended Shostakovich, Khachaturian, and Kabalevsky. When he returned to Japan, not only did he become an established composer, but a television personality and educator as well.

9. Kui Dong – Spring, Summer, Autumn, and Winter: I. Spring – Chinese composer Kui Dong initially only studied music under her mother’s insistence; her mother had been a musician, and as the two older siblings had not taken up music, young Kui was her mother’s last hope. As a composition student she got work collecting folk songs from remote villages, and this would have a profound effect on her.

10. Isang Yun – Duo for Cello and Harp: II. --- - Korean composer Isang Yun was held as a POW by the Japanese in World War II, after which he started a home for war orphans. Following the Korean War he moved to Germany to pursue music. After returning from a visit to North Korea, he was kidnapped by the South Korean secret service and accused of espionage, freed only after a petition signed by 200 artists, including Stravinsky and Ligeti.

11. Unsuk Chin – Violin Concerto: III. --- - Chin is a South Korean composer now based in Germany. Her music draws little influence from her Korean heritage, but rather from sources as diverse as Bartók, Debussy, Xenakis, Ligeti, electronic music, Balinese Gamelan, and Medieval composers. The concerto featured here is one of her more widely performed works, programmed in 14 different countries around the world.

12. Akira Ifukube – Godzilla, King of the Monsters: Main title theme – Born in Hokkaido, Ifukube was initially influenced by both his Japanese heritage and the Ainu people around him. Though he would end up studying forestry at university, he was first inspired to compose after hearing Stravinsky’s The Rite of Spring. He is most remembered for his film scores, especially those for Toho’s Godzilla movies.

13. Gordon Shi-Wen Chin – Symphony No. 3, “Taiwan”: III. Upsurge – Chin is one of the most prolific composers in Taiwan, responsible for a diverse array of concertos, four symphonies, a cantata, an opera, and much chamber and solo music. He is currently on faculty at the National Taiwan Normal University.

14. Sadao Bekku – Symphony No. 1: IV. Allegro con brio – Twentieth-century Japanese composer Sadao Bekku composed a wide array of music across several genres. He was influenced to a degree by jazz music, and his best-known work is his score for the cult film Matango, alternately known as Fungus of Terror or Curse of the Mushroom People.

15. Keiko Abe – Kazak Lullaby – Keiko Abe is a pivotal figure in the marimba world; not only did she contribute a great deal to technique and the repertoire, but she also assisted in the development of the modern five-octave concert marimba. She has been a tireless champion of the instrument, both in her native Japan and around the world.

16. Uzong Chae – Prelude No. 8 – Korean composer Uzong Chae has studied composition in Seoul, Salzburg, and Paris. The music he composes is influenced by everything from early music to Korean theatre to modern pop. His Preludes are based around a variety of techniques and styles, with No. 8 composed in a minimalist idiom.

17. Takashi Yoshimatsu – Symphony No. 4: IV. Finale: Allegro molto – Presto – Yoshimatsu did not start out studying music; in fact, he was a professor of technology initially, before quitting to join a Pink Floyd-inspired band. His classical compositions are heavily influenced by jazz, progressive rock, traditional Japanese music, and electronic music. He has composed at least six symphonies, eleven concertos, and more.

18. Various composers – The Red Detachment of Women: Act III. Dance of the Slave Girls, Dance of the Li Tribe, The Civil Corps’ Broadsword Dance – As with other Chinese works popular under Communist rule, this ballet is a collaboration by a number of composers. It has been called the first Revolutionary Ballet by the Chinese establishment, and it includes some of the best-known melodies in China.

19. Chi Liu – My Motherland – This patriotic tune was composed for the Chinese film Sangkamryung, which told the story of a three-year battle the Chinese People’s Volunteer Force fought in Korea. The first part, for soprano, tells of the beauty of the motherland and the soldiers’ love for their people. The second part, for choir, is a display of passion and grandeur.

20. Joe Hisaishi – Hana-bi (Fireworks): Hana-bi – Hisaishi is best-known for his film scores, especially those for animator Hayao Miyazaki, which include Princess Mononoke, Spirited Away, Howl’s Moving Castle, and Ponyo. Featured here is the main theme for the film Hana-bi, the score for which won him the Japanese equivalent of an Oscar in 1999.

Each month, Naxos Music Library presents a themed playlist for our subscribers to enjoy. We know that a database of over 1.7 million tracks can be a bit daunting, so we'd like to highlight some of the amazing music that is available to you. Let it kickstart discovery!
Posted by Naxos Music Library at 4:18 PM No comments: