Label in the Spotlight: Tactus Records 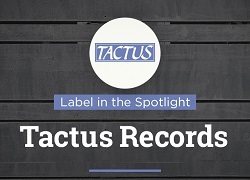 Tactus was founded in 1986 by the late Mr. Serafino Rossi (1927–2009), dedicated to music’s Italian heritage and not least the discovery of forgotten Renaissance and Baroque composers who made important contributions to it. The label has also discovered many talented performers; Rinaldo Alessandrini, Enrico Gatti, Sergio Vartolo, Federico Maria Sardelli, and Modo Antiquo are just some who began their recording careers with Tactus.

To hear the Tactus sampler, access NML as usual, go to the Playlists section, and select the Label in the Spotlight folder under the Themed Playlists tab. You can also access it via the rotating banners. If you are on your institution's premises, you may also be able to access it if you CLICK HERE.

We've sifted through all the new releases for June 2016, and we're highlighting our favorites. Some of these are obscure works that may be unknown to you, while others are fresh takes on standard repertoire. If you're like us and are constantly craving something new to enjoy, take a spin through these tracks to get a taste of what is now available to you in NML. And if you hear something you love, click on the cover art in the player window to be taken directly to the full album!

Jean Sibelius
Symphony No. 2: I. Allegretto

The Coming of Winter

Each month, Naxos Music Library presents a new release playlist for our subscribers to enjoy. We know that a database of over 1.85 million tracks can be a bit daunting, so we'd like to highlight some of the amazing music that has become available to you just this month. Let it kickstart discovery!
Posted by Naxos Music Library at 1:53 PM No comments: 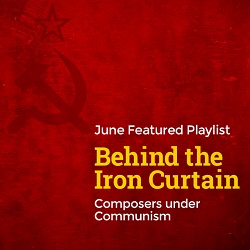 As part of its Cold War strategy, the Soviet Union established artistic restrictions that it felt would create a unique cultural identity and unify its people. Throughout Communism’s reign over USSR and Eastern Europe—under the Zhdanov Doctrine (1946-1953) especially—the ability of composers to pursue their art was heavily censored, and they were forced to choose between conforming to the musical tenets foisted upon them or staying true to their art at the risk of being blacklisted, imprisoned, or worse.

For our parents’ and grandparents’ generations, the specter of Soviet Communism was a serious concern not unlike the fear of terrorism today. Like these composers, if we have to choose between freedom and security, what will we decide? It’s important to examine this time in history, both for its influence over art and for the lessons it can offer our present world. Lest we forget, let’s have a look at what life was like Behind the Iron Curtain.

1. Dmitry Shostakovich – Symphony No. 10: II. Allegro – Had Shostakovich not been so hugely popular in the Soviet Union, he might have endured even greater opposition than he did. Even still, he was officially denounced under the Zhdanov Doctrine, and his career was spent trying to straddle that line between appeasing the censors and maintaining his artistic integrity, at times even sneaking his opposition into the music right under the censors’ noses.

2. Sergey Prokofiev – The Year 1941: I. In the Struggle – Like Shostakovich, Prokofiev was denounced under the Zhdanov Doctrine, and his symphonic suite The Year 1941 was among his works that were blacklisted. Prokofiev lived the remainder of his life under considerable artistic restrictions, and in a sad twist, he died on the same day as Stalin, missing out on the cultural thaw to come.

3. Georgy Sviridov – Metel (The Snowstorm): Troika – Sviridov was a composer who managed to avoid conflict with Soviet censors thanks to the nationalist spirit of his music. He composed a considerable amount of gorgeous choral music, his most famous setting texts by Pushkin. Sviridov also composed music for a film adaptation of Pushkin's story "Metel (The Snowstorm)".

4. Mieczysław Weinberg – Symphony No. 6: III. Allegro molto – Weinberg moved to the Soviet Union in 1939, avoiding the fate that befell most of his Polish-Jewish family during the Holocaust. However, he was imprisoned in 1953 for “Jewish bourgeois nationalism” and released only after Shostakovich’s intercession and the death of Stalin. Some refer to him as the “third great Soviet composer, along with Prokofiev and Shostakovich”.

5. Aram Khachaturian – Spartacus Ballet Suite No. 2: I. Adagio of Spartacus and Phyrigia – Khachaturian was mostly accepted by the Soviet establishment, though he was briefly denounced under the Zhdanov Doctrine—likely more for political reasons than artistic. He is the best-known composer from Armenia, and he incorporated a great deal of folk melodies from that region.

6. Grażyna Bacewicz – Overture – Bacewicz chose to play along with the Soviet tenets of “social realism”, which meant that most of her earlier compositions were neo-classical and folk-inspired. There weren’t many Polish composers under Communism who could create large-scale works that passed censorship, but Bacewicz was one of them.

7. Nikolay Myaskovsky – Symphony No. 23: III. Allegretto vivace – Myaskovsky, a close friend of Prokofiev, chose not to leave the USSR, nor did he express his personal feelings about Stalin within his music. Even still, he didn’t escape denunciation under the Zhdanov Doctrine, and he refused to cooperate with requests to repent of his “anti-proletarian” music. As a result, he was not officially rehabilitated until after his death.

8. Reinhold Glière – Coloratura Soprano Concerto: II. Allegro – As the final living representative of pre-revolution Russian nationalism, Glière enjoyed immunity from the cultural purges brought by the Soviets. This meant that he didn’t need to move to the West as others did around that time, and he wasn’t pushed to the East like some who stayed. He did voluntarily take trips east, though, to give concerts in Siberia and work in Uzbekistan.

9. Arvo Pärt – Tabula Rasa – As part of a later generation of composers, Estonian composer Arvo Pärt enjoyed slightly less-strict limitations on composition, even ultimately emigrating to Vienna and Berlin (though not without a prolonged battle with Soviet officials). Still, he was accused of “susceptibility to foreign influences” by Zhdanov flunky Tikhon Khrennikov in 1962, though he went on to win a prestigious composition prize only nine months later.

10. Alexander Gretchaninov – Liturgy of St John Chrysostom No. 4: We have seen the True Light – A protégé of Rimsky-Korsakov, Alexander Gretchaninov was one of the earliest composers to flee Communist restrictions; not only were they a threat to him artistically, but they were at odds with his deep religious faith. He ultimately spent the final thirty years of his life in France and the United States, watching World War Two and Stalin’s reign from afar.

11. Yury Shaporin – The Decembrists: Soldiers’ Chorus – One result of Stalin’s restrictions on music was that very few operas of any merit were produced. Shaporin’s The Decembrists took over 25 years to come to fruition, in part because of constant demands by the authorities for revision, and it wasn’t premiered until a few months after Stalin’s death. Despite the rampant censorship, it was good enough to gain the support of Shostakovich, who was usually no champion of Shaporin’s music.

12. Tikhon Khrennikov – Much Ado…Because of Hearts: Kanzone des Bretunkenen – One of the prominent villains in Soviet music was Tikhon Khrennikov, who as Secretary of the Union of Soviet Composers worked tirelessly to promote Zhdanov’s ideals and stamp out modernism and “anti-proletarian” music. Naturally, his music was regularly presented as a reference for Soviet realism, and it has largely vanished since the collapse of the USSR.

13. Lev Knipper – Meadowland (Polyushko Polye) – A prolific composer who managed to avoid censorship, Knipper also served as a secret agent for the USSR during World War Two. The Kremlin recruited musicians, ballerinas, and acrobats to assassinate Nazi leaders should Moscow fall and the Germans attempt to organize celebratory concerts. Knipper was charged with killing Hitler himself should the opportunity arise.

14. Dmitry Kabalevsky – Symphony No. 1: II. Allegro molto agitato e con spirito – Kabalevsky was another composer whose association with the Zhdanov Doctrine was probably more political than artistic. Despite having very conservative and populist musical tendencies, he was slated for denunciation before his official connections succeeded in getting his name removed from the list.

15. Vladimir Jurowski – Symphonic Pictures, “Russian Painters”: IV. Morning of the Streltsy’s Execution – After Stalin died, Nikita Khrushchev took over the USSR, and he brought in a brief period known as Khrushchev’s Thaw. Restrictions on art were (slightly) loosened, and in 1956 there was held an exhibition in St Petersburg of paintings previously kept unseen. Jurowski used seven of these works as inspiration for his Symphonic Pictures.

16. Galina Ustvolskaya – Bol’shoy Duet, “Grand Duet”: II. – — Ustvolskaya’s laser-like work was too unusual to gain much performance in the USSR, but it was also too unusual to fit neatly into what the censors liked to prohibit. Shostakovich, her teacher, said, “I am convinced that the music of G.I. Ustvolskaya will achieve worldwide renown, to be valued by all who perceive truth in music to be of paramount importance.”

17. Alexander Mosolov – Zavod (Iron Foundry) – Alexander Mosolov was drawn to futurism early in his career, and he enjoyed considerable dissonance and chromaticism. This didn’t sit well with the Soviet authorities, of course, and in 1937 he was imprisoned for alleged counter-revolutionary activities. Originally sentenced to eight years, he was released after eight months thank to intervention by Glière and Myaskovsky, though he remained in exile for five years.

18. Gavriil Popov – Symphony No. 1: III. Presto – Popov displayed every bit as much potential as Shostakovich in his Symphony No. 1, but immediately after its premier, the work was banned and never performed again in his lifetime. Fearing further reprisal from the authorities, his composition style changed to conform to the government’s expectations, and his work never lived up to the potential displayed in this symphony.

19. Alfred Schnittke – Concerto Grosso I: II. Toccata – Like many Soviet composers, Schnittke paid the bills by composing nearly seventy film scores, an outlet that allowed slightly greater stylistic freedom as long as it served the story. For his more “serious” compositions he often utilized a technique of his own, polystylism, which combined elements of many different styles and eras of composition into one big collage of sound.

20. Nikolay Roslavets – Prelude No. 5 – Roslavets was a futurist composer who ran afoul of cultural purges in the 1920s. Accused of being anti-proletariat and formalist, he was ultimately banned from holding any official position. His music was actively suppressed throughout the Soviet Era, and his name was even expunged from musical dictionaries for thirty years after his death, finally returning in 1978 in a negative context.


Each month, Naxos Music Library presents a themed playlist for our subscribers to enjoy. We know that a database of over 1.85 million tracks can be a bit daunting, so we'd like to highlight some of the amazing music that is available to you. Let it kickstart discovery!
Posted by Naxos Music Library at 10:51 AM No comments: