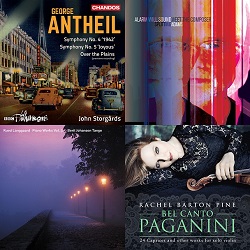 Each month, Naxos Music Library presents a new release playlist for our subscribers to enjoy. We know that a database of over 1.9 million tracks can be a bit daunting, so we'd like to highlight some of the amazing music that has become available to you just this month. Let it kickstart discovery!
Posted by Naxos Music Library at 11:56 AM 1 comment: 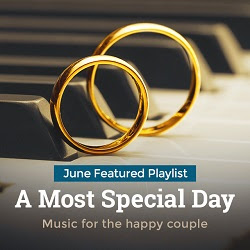 Ah, June. It’s that point in the year when it seems like every weekend we have to get dressed up in itchy clothing to go sweat in some rented garden outside of town while an endless stream of people we’ve never seen before act like they know the bride(s) and/or groom(s) better than we do. And maybe we’re secretly hoping that someone’s crazy uncle gets really drunk and embarrassing just to liven up the proceedings. Weddings…

But we suffer through them because someone who is special to us has found the love they want to spend the rest of their life with, and that’s what matters. In the end, all the drama, expense, and small talk with weird strangers is worth it because we get to join with loved ones to celebrate A Most Special Day.

1. Gene De Paul / Saul Chaplin – Seven Brides for Seven Brothers: June Bride – From a 21st-century perspective, this story about seven brothers who carry away seven women in hopes of wooing them seems more than a little wrong. But if we ignore the Stockholm Syndrome and the unrealistic odds that all seven brothers who sing and dance actually want a bride, it’s a cute movie full of memorable songs.

2. Edvard Grieg – Wedding Day at Troldhaugen – Originally a part of Grieg’s Lyric Pieces for piano, this tune was composed as an anniversary gift to his wife. In its orchestrated form, it conjures a mental picture of guests arriving at a wedding and conversing excitedly in anticipation of the joy to come.

3. Jean Sibelius – Processional – Finland’s greatest composer, Jean Sibelius, derived this stately piece from a collection of songs composed for the Masonic Lodge of which he was a member. In this imaginary wedding, we’re picturing the wedding party entering the hall and taking their places at the front.

4. Toivo Kuula – Häämarssi (Wedding March) – Toivo Kuula was Sibelius’ first composition student and a composer of considerable potential who died when he was only 35. His Wedding March is a charming piece that could continue the procession of the wedding party.

5. Richard Wagner – Lohengrin: Bridal Chorus – And now it is time for the entrance of the bride herself, if this is a traditional sort of church wedding, anyway. Wagner’s Bridal Chorus is one of those melodies that everyone knows, even if they’re unaware that it comes from an opera, and there’s a fair chance you’ll have some Pavlovian urge to stand up when you hear this melody start.

6. Bedřich Smetana – The Bartered Bride, Act I Scene 2: Jako matka požehnáním – Smetana’s most famous opera tells of two lovers who overcome various obstructions and misunderstandings to be together. This duet between the lovers occurs near the beginning of the opera, when—not knowing the trials to come—they commit to loving each other no matter what.

7. Elisabetta Brusa – Wedding Song – Composer Elisabetta Brusa describes this piece as such: “[It] is a hymn/song-like ode to the inner and outward joy of love and marriage: gentle, deep, and solemn in one respect, joyful, open, and luminous in another.”

8. Amy Woodforde-Finden – The Myrtles of Damascus: No. 4. I Did Not Know – Woodforde-Finden is known for composing a number of song cycles that had some success in the early 20th century. The lyrics for this particular song include: “I did not know that Love held all of bliss…I did not know until I felt your kiss!”

10. Felix Mendelssohn – A Midsummer Night’s Dream: Wedding March – Now that the ceremony is over, it’s time for the happy couple to exit the stage! Mendelssohn’s faster-paced and celebratory Wedding March has been a timeless classic that has accompanied many a pair on their trip back up the aisle.

11. Camille Saint-Saëns – Caprice-Valse, “Wedding Cake” – This piece for piano and orchestra was written as a wedding gift for a friend of the composer. Its playful character brings to mind the start of a wedding reception, where perhaps the happy couple adhere to the time-honored tradition of smashing wedding cake in each other’s face.

12. Edward German – Tom Jones, Act III: Hark, the merry marriage bells! – Edward German was the heir to Arthur Sullivan in the world of English comic opera. His operetta Tom Jones was a success in its day, even appearing on Broadway, and here we’ve included the celebratory finale.

13. Arthur Sullivan – The Mikado, Act II: For he’s gone and married Yum-Yum – The Mikado is the work of British comic opera legends Gilbert and Sullivan, who attempted to skewer British society by setting the story in Japan. Of course, in the process they ended up being rather disrespectful to Japanese culture. But the opera did produce the silly tune selected here, which sounds like the wedding guests have gotten into the adult beverages.

14. Ned Rorem – Piano Album I: Marriage Measures – Ned Rorem lived with his partner Jim for thirty-two years before the latter passed, and the composer would frequently create piano miniatures for him. Marriage equality was unfortunately not yet the law of the land when they were together, however, so Rorem’s Marriage Measures was a gift to some friends.

15. Geirr Tveitt – Brudlaups-Klokkor (Wedding Bells) – Tveitt composed this piece in about a half hour while sitting outside the church where his friend’s daughter was about to be married. It’s a lovely little piece that, combined with the Rorem waltz, could be the happy couple’s first dance, or a bride or groom’s dance with a tearful parent.

16. Traditional – Sønderho Bridal Trilogy, Part II – This untitled folk melody from Sønderho, in western Denmark, is approximately four hundred years old. It’s arranged here for string quartet, and one can imagine it as part of the festivities in a rural Danish wedding celebration.

17. Niels Gade – Et Folkesagn (A Folk Tale): Brudevalsen (Bridal Waltz) - Niels Gade was an important influence on several Scandinavian composers who followed him, including Edvard Grieg and Carl Nielsen. His Brudevalsen became a vital part of Danish weddings, but it is said that he didn’t judge it to be particularly great at the time, and that it had to be rescued from a trash can.

18. Karl Goldmark – Symphony No. 1, “Ländliche Rochzeit” (Rustic Wedding Symphony): V. Tanz: Finale – One of Goldmark’s best-known works, the Rustic Wedding Symphony follows a non-traditional five-movement form, with the final movement depicting the celebratory dance at the end of a wedding. The work was championed by conductors Thomas Beecham and Leonard Bernstein.

19. Sergey Prokofiev – The Tale of the Stone Flower: Wedding Suite: V. Wedding Dance – Prokofiev’s final ballet was premiered posthumously, but he was able to derive a suite from the material before he passed. This final movement from the suite is a festive dance to help keep the wedding afterparty going.

20. Peter Maxwell Davies – An Orkney Wedding with Sunrise – Davies modeled this piece after an actual wedding he attended in the Orkney Islands off the northern coast of Scotland. It depicts the event from start to finish, and as the wedding guests depart into the dawn, the bagpipes can be heard echoing over the landscape.

21. BONUS: Jimmy Roberts – I Love You, You’re Perfect, Now Change, Act II: Marriage tango – And here’s a reminder to enjoy the honeymoon to the fullest, because it won’t last forever.

Each month, Naxos Music Library presents a themed playlist for our subscribers to enjoy. We know that a database of over 1.9 million tracks can be a bit daunting, so we'd like to highlight some of the amazing music that is available to you. Let it kickstart discovery!
Posted by Naxos Music Library at 12:25 PM No comments: