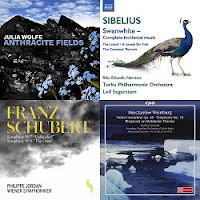 We're kicking off a new monthly playlist for your enjoyment. We've sifted through all the new releases for October 2015, and we're highlighting our favorites. Some of these are debut recordings of brand new works, while others are fresh takes on standard repertoire. If you're like us and are constantly craving something to discover, take a spin through these tracks to get a taste of what is now available to you in NML. And if you hear something you love, click on the cover art in the player window to be taken directly to the full album!

To hear the playlist, access NML as usual, go to the Playlists section, and select the Opening Notes folder under the Naxos Music Library Playlists tab. If you are on your institution's premises, you may also be able to access it if you CLICK HERE.

Krzysztof Pendereci
A Sea of Dreams Did Breath On Me: No. 6 The Angelus
Warsaw Philharmonic Choir and Orchestra; Antoni Wit


Each month, Naxos Music Library presents a new release playlist for our subscribers to enjoy. We know that a database of over 1.6 million tracks can be a bit daunting, so we'd like to highlight some of the amazing music that has become available to you just this month. Let it kickstart discovery!


Posted by Naxos Music Library at 11:17 AM No comments: 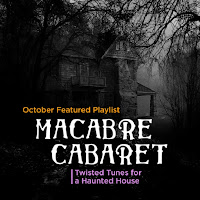 Classical music has well earned its reputation as the perfect accompaniment for a peaceful evening or a soothing slumber, but to pigeonhole it as such would discount the tremendous variety it has to offer. It can also be an expression of the mystical, the spectral, even the terrifying.

Whether you celebrate Halloween as a princess, a zombie, or—better yet—a zombie princess, or if you’re stocking up on candy corn and chocolate pumpkins to hand out to the neighborhood kids, we’ve got the soundtrack for you. Let these twisted tunes and haunted harmonies be the house band for your own Macabre Cabaret.

3. Franz Liszt – Totentanz – Franz Liszt was known to have a considerable fascination with death, even visiting jails to observe those who’d been condemned to death. He was also in attendance at the premier of Hector Berlioz’ Symphonie fantastique, a work that had a profound influence on him. These two interests converge in his Totentanz (Dance of the Dead), which follows Berlioz’ example and incorporates the medieval Dies Irae melody.

4. Giuseppe Verdi – Messa da Requiem: Dies irae, dies illa – Upon the death of Rossini, Verdi instigated a requiem in his memory, with different composers contributing each section. The finished work was never performed in Verdi’s lifetime, but upon the death of writer Alessandro Manzoni he expanded his portion of the Rossini requiem into a full piece in Manzoni’s honor. It went on to become one of the greatest choral works of the Romantic Era.

5. Carl Orff – Carmina Burana: Fortuna Imperatrix Mundi: Fortune plango vulnera – Orff, shortly after the premiere of this work, wrote to his publisher: "Everything I have written to date, and which you have, unfortunately, printed, can be destroyed. With Carmina Burana, my collected works begin." The opening section is familiar to everyone through its frequent use in film and television, but the rest of it, including this section, is well worth knowing.

6. Niccolò Paganini – 24 Caprices: No. 5 in A Minor – Paganini was a rock star of his day, becoming wildly famous and wealthy as a violinist of unparalleled skill and showmanship. He was so talented that a rumor surfaced that he had sold his soul to the devil in exchange for his ability! He took the violin to a level it had never seen before, and his 24 Caprices would influence many composers to come.

7. Léon Boëllmann – Suite Gothique: IV. Toccata – A composer of considerable potential who died when he was only 35, Boëllmann is primarily known today for his Suite Gothique, which is a staple of the organ repertoire. He was also a respected teacher and critic. He left behind three young children when he died, and his daughter Marie-Louise went on to be a noted organ teacher herself.

8. Francis Poulenc – Organ Concerto: I. Andante, II. Allegro giocoso – Poulenc had never composed for the organ before this work was commissioned, and he studied the music of Bach and Buxtehude to familiarize himself with the instrument. This Baroque influence can be heard in the piece, which opens with a chilling Andante that has been the soundtrack to many a spooky scenario.

9. Gloria Coates – Symphony No. 1, “Music on Open Strings”: I. Theme and Transformation – Gloria Coates has made a name for herself through her glissando-heavy composition style. It is music that sounds unsteady, even frightening in small segments, yet combines into an orderly, stable whole. To date she has composed fourteen symphonies, making her the most prolific female symphonist in history.

10. George Crumb – Black Angels: 13 Images from the Dark Land, “Images I”, Part III: No. 10 God-music – The Kronos Quartet was formed after violinist David Harrington heard Black Angels for the first time and fell in love with its extended techniques and mysterious sound world. This work is written for an amplified string quartet, and the members are also expected to play pitched crystal glasses and tam tams.

11. J.S. Bach – Toccata and Fugue in D Minor, BWV 565: Toccata – This piece is one of Bach’s most popular, yet there’s a fair chance that he is not the true composer of it. The original score has been lost, and we can only go with the word of the organist who owned the oldest copy. Whatever the case, its dramatic opening is a suitable soundtrack for any haunted house.

12. Manuel de Falla – El amor brujo: Danza ritual del fuego – De Falla’s ballet El amor brujo tells the story of an Andalusian gypsy woman who is forced to marry a man she does not love. Her husband dies, freeing her to be with her lover, but her husband’s ghost haunts her still. She ultimately undertakes a ritual fire dance, which lures the specter into the flames and releases her from its haunting.

13. Alberto Ginastera – Piano Concerto No. 1: IV. Toccata concertata – This final movement of Ginastera’s First Piano Concerto comes in the form of a malambo, a popular Argentinian dance that is roughly a more virile, macho form of tap dance. It is performed by men only, giving them a chance to express themselves through dance without having to support a partner. Ginastera’s violent piece is a spectacular showcase for the soloist.

14. Camille Saint-Saëns – Danse Macabre – Danse Macabre depicts a legend in which Death appears at midnight on Halloween and wakes up the dead to dance as he plays his violin. You can hear the tolling of the clock striking twelve, followed by the entrance of the solo violin playing a tritone, also known as the devil’s interval. The dead emerge to dance the night away before returning to the grave at dawn.

15. Rued Langgaard – Symphony No. 9, “From Queen Dagmar’s City”: Ribe Cathedral – The honey badger of Scandinavian composers, Langgaard was harshly dismissed by the Danish musical establishment of his day, but in recent years he has gained considerable notoriety. He was certainly influenced by Wagner and Strauss, yet his work contains a remarkable originality characterized by dramatic mood swings and vivid imagery.

16. Sergey Prokofiev – Cinderella Suite No. 1: VII. Cinderella’s Waltz – Many a child likes to dress up as Cinderella for Halloween, and this waltz by Prokofiev makes the perfect accompaniment. Not only does it have a memorable melody that glides across the dance floor, but it also has an eerie minor-key twist to it that makes it suitable for a Cinderella that turns into something else entirely at the stroke of midnight.

17. Dmitry Shostakovich – Symphony No. 10: II. Allegro – Mostly composed in the months following the death of Stalin, Symphony No. 10 earned Shostakovich—not for the first time—the scrutiny of the Soviet establishment. In historical context it’s hard not to imagine the tumultuous second movement as an indictment of Stalin’s leadership; whether or not this was intended, it certainly paints a striking image of terror and violence.

18. Gustav Holst – The Planets: VI. Uranus, the Magician – Gustav Holst was fascinated by astrology, and the seven movements of The Planets are intended to be musical portraits of the astrological traits he associated with each planet. He ascribed the qualities of a mischievous magician to Uranus, and the music is accordingly vulgar and grotesque.

19. Roxanna Panufnik – Beastly Tales: The Crocodile and the Monkey: Death by drowning, death by slaughter – Panufnik’s work for singers and orchestra is based on a story by Indian author Vikram Seth in which a crocodile’s wife convinces him to invite his friend, a monkey, over for dinner—or more accurately, to become dinner. Does our monkey friend survive? You’ll have to hear this morbid tale to find out!

20. Alexandre Desplat – Harry Potter and the Deathly Hallows, Part II: Snape’s Demise – He was the villain everyone loved to hate, but in the end Severus Snape’s undying, unrequited love for Harry’s mother led him to do the right thing as he lay dying. Halloween is the perfect time for kids—and, let’s face it, adults—to go out in their wizarding best. Which house will you be supporting?


Each month, Naxos Music Library presents a themed playlist for our subscribers to enjoy. We know that a database of over 1.6 million tracks can be a bit daunting, so we'd like to highlight some of the amazing music that is available to you. Let it kickstart discovery!
Posted by Naxos Music Library at 9:19 AM 1 comment: