Label in the Spotlight: Divine Art 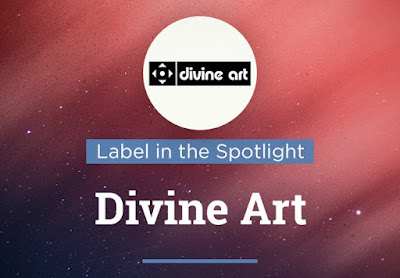 To hear the Divine Art sampler, access NML, go to the Playlists section, and select the Label in the Spotlight folder under the Themed Playlists tab. You can also access it via the rotating banners. If you are on your institution's premises, you may also be able to access it if you CLICK HERE.

Posted by Naxos Music Library at 10:23 AM No comments:

Interested in learning more about NML-World? Our very own Nick Floyd will be conducting a free webinar to answer any questions you might have about the newest member of our family. This will occur twice, so pick the best time for you!

We'll keep it short and sweet, and like any seminar worth your time, we've got some swag to give away. Any institution in attendance will be given free access to NML-World for five users for the fall semester, and any new NML-World order placed before December 1 will automatically be upgraded to premium quality audio at no additional cost!

Questions? Just ask! We hope to "see" you there! 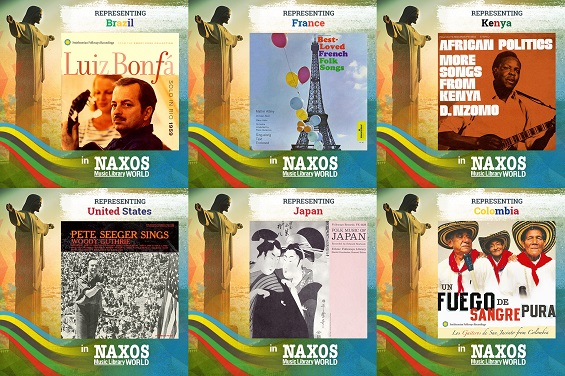 Posted by Naxos Music Library at 10:43 AM No comments:

August 2016 - Featured Playlist: From the Andes to the Amazon 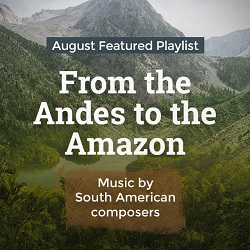 This summer the world turns its attention to South America as the Olympics take place in Rio de Janeiro. It’s a sprawling, gorgeous land with towering mountains to climb and thick jungles to explore, and in every corner can be found stunning monuments to the proud civilizations that call this continent home.

South America is not necessarily known for its classical music, but that doesn’t mean there’s not a wealth of excellent composition to be found in its history. This month we’re taking a look at twenty different composers who come to us from Peru to the Pampas, and From the Andes to the Amazon.

1. Oscar Lorenzo Fernández – Reisado do pastoreio: III. Batuque – Fernández was born and died in Rio de Janeiro, spending much of his career in education. His Malazarte is considered the first successful Brazilian nationalist opera, and the suite derived from this work makes use of the same batuque (an Afro-Brazilian dance) presented here under the name Reisado do pastoreio.

2. Alberto Ginastera – Ollantay: II. Los Guerreros – Argentinian composer Alberto Ginastera based his three-movement orchestral work Ollantay on an Incan legend. He described the second movement, “Los Guerreros”, by saying, “The warriors of Ollantay dance while they prepare for war. Excited, they imitate the armies in battle.”

3. Astor Piazzolla – Las 4 Estaciones Porteñas: Verano Porteño – Piazzolla composed this work for his personal quintet. Thirty years later, Leonid Desyatnikov arranged it for violin and string orchestra, adding quotations from Vivaldi’s The Four Seasons. However, in recognition of the season cycle of the southern hemisphere, he aligned the works in contrast; for example, the movement here, the summer portion, includes quotes from Vivaldi’s winter section.

4. Heitor Villa-Lobos – Bachianas brasileiras No. 5: I. Aria – It was only fitting that in the 2012 Olympics closing ceremonies, Villa-Lobos’ music was included when London passed the torch on to Rio de Janeiro. He is by far the most prominent name in Brazilian art music of the 20th century, and it was the piece selected here that was performed during the ceremonies.

5. Antônio Carlos Jobim – Garota de Ipanema – Probably the most prominent composer to bring the bossa nova sound to the world, Jobim is best known for “Garota de Ipanema” (“The Girl from Ipanema”), one of the most frequently recorded songs of all time. The version here is performed by soprano Cristiane Roncaglio and guitarist Andre Bayer.

6. Ariel Ramírez – Misa Criolla: Gloria - Ariel Ramírez composed his Misa Criolla in 1963 and 1964, making it one of the first masses to be composed in a language other than Latin following the Second Vatican Council’s decision to permit vernacular mass texts. It incorporates a considerable amount of Argentinian folk elements as well, and it remains Ramírez’ best-known composition.

7. Osvaldo Golijov – St Mark Passion: VIII. Por que? - Golijov, an Argentinian of Jewish descent, was initially hesitant to undertake a commission for a Passion setting, but eventually he accepted the job. The crowd at the premiere in 2000 was shocked by its radical departure from tradition, but ultimately gave it a 25-minute standing ovation, and the Boston Globe called it "the first indisputably great composition of the 21st century”.

8. Antonio Estévez – Cantata criolla, “Florentino, el que canto con el Diablo”: III. Allegro vive – Estévez was an exact contemporary of Ginastera who lived and worked in Venezuela. His best-known work, Cantata criolla, is based on a Venezuelan mythic poem with a Faustian tale of a llanero (plainsman) and his dealings with the devil.

9. Eduardo Arolas – La cachila – Argentinean Eduardo Arolas was a tango composer who specialized in the bandoneon, even earning the nickname “El tigre del bandoneón”. He was instrumental in helping shape the direction of Argentinean tango. After a few years in Montevideo, Uruguay, he moved to Paris, where he died as an alcoholic at only thirty-two years old.

10. Violeta Parra – Gracias a la Vida – Violeta Parra was the person responsible for a folk music movement known as Nueva Canción Chilena, or Chilean New Song. She was successful as a recording artist, with “Gracias a la Vida” ("Thanks to Life") becoming her best-known song. A couple years later she committed suicide, just a few months after her forty-ninth birthday.

11. Francisco Mignone – Congada – Mignone was a child star, gaining recognition in his region at the age of ten as a choro musician. By the time he was thirteen, he was a pianist and orchestra leader. He was the son of an Italian immigrant, but his music was strongly Brazilian nationalist in style, and he is one of the more significant Brazilian composers after Villa-Lobos.

12. Gabriela Montero – ExPatria – A talented pianist and noted improviser, Venezuela-born Gabriela Montero was able to pick out familiar melodies on the piano before she was old enough to speak. It was Martha Argerich who encouraged her to make improvisation a major part of her career, even though some stodgy classical people frowned on it. The work here selected, ExPatria for piano and orchestra, is her Opus 1.

13. Carlos Gomes – Fosca, Act I: Ahime! Dove sono? Ad ogni mover – Brazilian Carlos Gomes was an operatic composer who found fame in between Giuseppe Verdi and Giacomo Puccini. He was the only non-European to have success with opera in Italy in his day, and overall he was the first composer from the Western Hemisphere to achieve acceptance in Europe.

14. Alexandre Levy – Tango brasileiro - The earliest member of the notorious 27 Club, Levy died suddenly and of unknown causes in 1892. While much of his training and ancestry was French, he was born and raised in Brazil, and his work was instrumental in the development of a distinctly Brazilian nationalist style.

15. Carlos Guastavino – Piano Sonata in C-Sharp Minor: II. Scherzo: Molto vivace – Argentinian composer Carlos Guastavino earned the nickname “Schubert of the Pampas” for the great many art songs he wrote. He composed in a conservative, tonal style that stood in contrast to his contemporary, Alberto Ginastera, and afforded him a good income that let him compose full time.

16. José Serebrier – Symphony No. 3: Andante comodo – Serebrier has made his name and career as a conductor, amassing a considerable collection of accolades, but he is also an accomplished composer. His Symphony No. 3 was composed in only a week in 2003. As he put it, “it came out of my pen as if I was just transcribing something that had always been in my memory.”

17. Evencio Castellanos – Avileña Suite: IV. Amanecer de Navidad – One of the more prominent Venezuelan nationalist composers, Castellanos often incorporated folk melodies and instruments such as the cuatro (a four-stringed version of the classical guitar) and maracas into his music. The movements of his Avileña Suite allude to El Ávila, the mountain that separates Caracas from the Caribbean.

18. Manuel Gómez Carrillo – Rapsodia santiagueña - Gómez Carrillo was a significant ethnomusicologist who collected folk songs from northern Argentina. His Rapsodia santiagueña was named after his hometown, Santiago del Estero. Later in life he moved to Buenos Aires and led a vocal ensemble with his three sons, with other members of his family joining in from time to time.

19. José Luis Domínguez – The Legend of Joaquín Murieta, Act II: The toast and the people’s dance – Chilean conductor José Luis Domínguez decided to produce a composition of his own in 2008, completing this ballet by the end of the following year. It is based around tales of the nineteenth-century brigand Murieta, who is often considered to be the inspiration for Zorro.

20. Teresa Carreño – Highland (Souvenir de l’Escosse) – Venezuela-born Teresa Carreño’s talent was recognized when she was very young; when she was nine she even got to perform for President Abraham Lincoln. Nicknamed “The Valkyrie of the Piano”, she is also remembered for being offered piano lessons by none other than Franz Liszt—and turning him down.

Each month, Naxos Music Library presents a themed playlist for our subscribers to enjoy. We know that a database of over 1.9 million tracks can be a bit daunting, so we'd like to highlight some of the amazing music that is available to you. Let it kickstart discovery!
Posted by Naxos Music Library at 9:53 AM No comments: