Label in the Spotlight: ATMA Classique 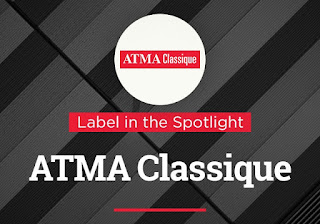 This sophisticated and stylish French-Canadian label has recordings ranging from core masterpieces such as Liszt’s B minor Sonata to intriguing, less familiar repertoire such as the choral music by the Estonian composer Veljo Tormis, sung by the vibrant Canadian ensemble Musica Intima.

Founded in 1994 by Johanne Goyette, ATMA has established a sterling reputation around the world for recordings with superb sound quality, featuring distinctive programs performed by some of the world’s finest musicians.

Distributed in 25 countries and present on all digital platforms, the ATMA catalog now comprises 450 titles in genres ranging from medieval to contemporary music, and including tango, traditional, and baroque music. ATMA recordings are notable for their high standards, and original, creative programs, which have garnered praise and numerous awards and prizes over the years.

To hear the ATMA Classique sampler, access NML as usual, go to the Playlists section, and select the Label in the Spotlight folder under the Themed Playlists tab. You can also access it via the rotating banners. If you are on your institution's premises, you may also be able to access it if you CLICK HERE.

Posted by Naxos Music Library at 12:19 PM No comments:

MARC .XML records covering titles added to NML and NML-Jazz over the second quarter of 2016 are now available! You can download only the latest set of records, or you can obtain the complete set combined by the month or year. As always, they are in .XML format, allowing you the freedom to process them to fit your system best.

If you have any questions about these records, don't hesitate to contact us.

Posted by Naxos Music Library at 9:03 AM No comments:

We've sifted through all the new releases for July 2016, and we're highlighting our favorites. Some of these are obscure works that may be unknown to you, while others are fresh takes on standard repertoire. If you're like us and are constantly craving something new to enjoy, take a spin through these tracks to get a taste of what is now available to you in NML. And if you hear something you love, click on the cover art in the player window to be taken directly to the full album!

Friedrich Gernsheim
Symphony No. 4: I. Allegro


Each month, Naxos Music Library presents a new release playlist for our subscribers to enjoy. We know that a database of over 1.89 million tracks can be a bit daunting, so we'd like to highlight some of the amazing music that has become available to you just this month. Let it kickstart discovery!
Posted by Naxos Music Library at 2:29 PM No comments: 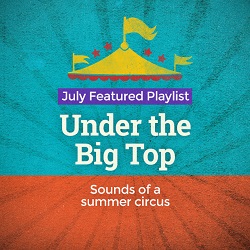 We’re right in the thick of summer, and for many of us we’re reminded of childhood trips to the circus. As adults we see the overpriced popcorn, the rigged games, the countless forms of sugar, and the very questionable treatment of animals; but sometimes it’s good to whisk away to those innocent days when clowns were funny and not creepy, or when the mere sight of cotton candy didn’t make your shirt shrink.

Plenty of composers have written music inspired by circuses and carnivals, and luckily as adults we can still enjoy this guilt-free. So strap on the big red rubber nose and practice your sad-clown shuffle as you run away to join us Under the Big Top.

1. Julius Fučík – The Entry of the Gladiators – Called the “Bohemian Sousa”, the magnificently mustachioed Julius Fučík was a prolific composer of military music, with many of his marches still performed in the Czech Republic today. His reputation in the West primarily rests on his earworm of a work The Entry of the Gladiators. Be grateful we didn’t put this one last on the playlist, or it would be marching through your head all day.

2. Karl King – Barnum and Bailey’s Favorite – Karl King was a largely self-taught musician who made his name composing band music. In many ways he did for the circus march what John Philip Sousa did for the military march. He was active in music education as well; while his compositions were typically at a very high technical level, he also contributed much to the school band repertoire at every level.

3. Cy Coleman – Barnum: Act II. Join the Circus – Cy Coleman was a prominent songwriter and Broadway composer throughout the twentieth century, and his hit musical Barnum was premiered in 1980. It ran for 854 performances and earned its composer a Tony Award nomination for Best Original Score.

4. Mark “Moose” Charlap – Clown Around: Animal Band – Moose Charlap’s final Broadway show suffered a quick demise thanks to ballooning production costs, and its soundtrack was long a true rarity, with beat-up vinyl copies reaching three figures on eBay. At last the soundtrack has been reissued, and you can hear Charlap’s boisterous score in NML.

5. Brian Carpenter – Big Top Suite, Part 2: Clowns – The Beat Circus is a lively combo of jazz, klezmer, tango, and burlesque perfect for any carnival atmosphere. Their album Ringleaders Revolt found its way into NML thanks to Innova Records, and it falls somewhere in the giant space between Kurt Weill, Karl King, Tom Waits, and the Squirrel Nut Zippers.

6. Walter Piston – The Incredible Flutist: Polka Finale – Piston’s only composition for the stage, his ballet The Incredible Flutist, was premiered by Arthur Fiedler and the Boston Pops in 1938. It tells of the mischievous exploits of a flutist in a marketplace and circus, and it contains all the colorful music one might expect of from such a setting.

7. Leo Weiner – Farsang (Carnival) – Born into a Jewish family in Hungary, Weiner was a contemporary of Bartók and Kodály. His style was more conservative, however, and his reputation more solidly rests on his major contributions to Hungarian music education in the first half of the twentieth century.

9. John Russell – Carnival of the Animals (after Saint-Saëns): V. Elephants - Saint-Saëns never intended for Carnival of the Animals to be anything more than a fun parlor piece for two pianos and a handful of other instruments, but it has since become one of his most popular works. This version is an arrangement that takes advantage of the many colors of the full orchestra.

10. Andrew Pryce Jackman – Circus: III. Trapeze; IV. Ringmaster 2 – Andrew Pryce Jackman built his reputation as a member of various prog rock bands in the 1960s and 1970s, then continued on a career as an arranger for bands like Yes and Rush. His son Henry is a film composer, scoring popular movies like X-Men: First Class, Wreck-It Ralph, a pair of Captain America flicks, and the two Kick-Ass films.

11. Alfred Schnittke - Clowns and Kids Suite: I. Title-Credit Music - Like many Soviet composers, Schnittke paid the bills by composing nearly seventy film scores, an outlet that allowed slightly greater stylistic freedom as long as it served the story. For his more “serious” compositions he often utilized a technique of his own, polystylism, which combined elements of many different styles and eras of composition into one big collage of sound.

12. Alfred Hill – Symphony No. 5, “The Carnival”: IV. Finale: Allegro risoluto – A native of Australia, Hill enjoyed a successful composition career there and in New Zealand, though his music fell by the wayside later on. There has been some interest in reviving his work, which includes thirteen symphonies, eight operas, seventeen string quartets, and many concertos.

13. Emmerich Kálmán – Die Zirkusprinzessin (The Circus Princess): Was in der Welt geschieht – Kálmán was a Hungarian Jewish composer of operettas during the first half of the twentieth century. Despite his Jewish heritage, he was one of Hitler’s favorite composers, and after turning down an offer to become an “honorary Aryan” he fled to Paris and then to New York.

14. William Schuman – Circus Overture – Initially more interested in popular music, Schuman’s first real exposure to classical music came when he was nearly twenty years old, when he saw Arturo Toscanini conduct the New York Philharmonic at Carnegie Hall with his sister. The very next day he decided to become a composer, and he dropped his business studies to enter a conservatory.

15. Joelle Wallach – String Quartet No. 2, “The Circus Animals’ Desertion”: I. --- – Wallach drew her inspiration for this piece from a poem by William Butler Yeats in which circus animals are used as a metaphor for creative inspiration. She composed the string quartet in response to the sudden, untimely death of her husband.

16. May Howlett – At the Circus: No. 3 Catherine Wheels – Born near Perth, Western Australia, May Howlett has enjoyed a career as a pianist, composer, actress, and teacher. According to the disc liner notes, At the Circus was “composed to appeal to a younger audience” and refers “to those events that thrilled and delighted us as children when we entered the magic world of circus.”

17. Hamilton Harty – Fantasy Scenes on an Eastern Romance: I. The Laughing Juggler - Besides being a composer of some success in his day, Harty was known as a talented conductor and valuable accompanist, even earning the nickname “the prince of accompanists”. As a conductor he helped bring the Hallé Orchestra back to respect, and he even led the London Symphony Orchestra for a couple years.

18. Dmitry Kabalevsky – The Comedians: X. Epilogue - Kabalevsky is primarily known in the West for his suite The Comedians, but in Russia he is probably best-known for his vocal music. He was also a major contributor to music education, setting up pilot programs in more than two dozen Soviet schools and even for a time teaching a class of seven-year-olds.

19. Antonin Dvořák – Carnival – Dvořák composed Carnival as the second in a trilogy of overtures based around the same melodic theme, the other two being In Nature’s Realm and Othello. He called this theme “Loneliness”, and in Carnival it only appears briefly, played in turn by the clarinet and the cor anglais in a quiet moment in the midst of all the merrymaking.

20. John Philip Sousa – The Thunderer – Sousa may have been known for his military marches, but that didn’t prevent his tunes from being used for more lighthearted purposes. This arrangement of one of his marches is played on a fairground organ, which is also known as a band organ for its ability to imitate a full band. Often ornately designed to be attractions in their own right, band organs reached their height from the 1880s to the 1920s.

Each month, Naxos Music Library presents a themed playlist for our subscribers to enjoy. We know that a database of over 1.89 million tracks can be a bit daunting, so we'd like to highlight some of the amazing music that is available to you. Let it kickstart discovery!


Posted by Naxos Music Library at 10:28 AM No comments: